We’re sitting down with Vinyl Floor. What has the band been doing this last year?

Charlie: Well, actually the ‘Vaudeville’ recordings took up some of the first months of 2014. We did nearly all of the vocals right after New Year and spent time on overdubs and other additional recordings. The album was mastered and completed in May. Then we took the summer off since we had been recording for a long time. And the rest of the year has primarily been promoting the album and playing a few shows. And I know that the guys have already started up songwriting again. We are supposed to meet in December and maybe there we´ll get a feeling of what everyone´s been working on recently. 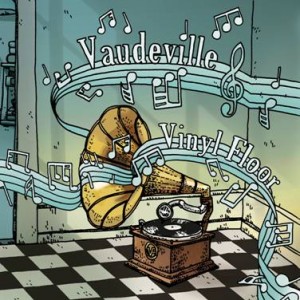 Vaudeville is your latest album. What does it add to the story that is Vinyl Floor?

To me, ‘Vaudeville’ is a giant, melting pot consisting of several of the elements we love about music. We listen to a lot of different music and all take on different approaches to songwriting. We love rock ‘n’ roll but we also love progressive rock, pop and country. Our previous album was interwoven by a storyline. It was a conceptual album. On the surface ‘Vaudeville’ has no clear direction and obviously it has puzzled some people. But we kind of appreciate the fact that we somehow manage to work outside of the limits, or at least we feel no outside pressure except for what we might put on ourselves. We´re not a very big band and we don´t get a lot of radio airplay. But we are constantly curious about expanding our horizons and we are aware that ‘Vaudeville’ probably demands a lot from the listener. You need to sit with this stuff. The record makes perfect sense to me and that is also due to the fact that it was conceived during some personal times of turmoil. ‘Vaudeville’ is probably the most diverse we will ever get but definitely not the last time we´ll be experimenting with expressions and instrumentation.

We talked about your current music briefly, but what is the one song that you still go back to and think “man, I’ve done it – this is great”? Why is that?

Actually the new one already feels like going back to something because I don´t really listen to our records once they are released. Then I would just want to re-do something right away and the thought makes me uncomfortable. But a song I´m very proud of is ‘Colorblind’. Not just because I co-wrote it. It obviously has a fine melody and strong lyrics, but I feel like we managed to give it its own identity. The haunting strings, the chord progression, the industrial beats, it just sounds quite unique to me. On our previous record there´s a song called ‘Ghost of England’. It features a horn section and I think that song is very original, too. I can´t get tired of it.

What has been your most memorable live experience?

I think I speak on behalf of the whole band when I say our recent ‘Vaudeville’ party in Copenhagen. As a musician, it was a dream coming true performing live for the very first time with The Vindla Strings who also provided strings for two Vinyl Floor albums. It was something we had been talking about doing for a while. They made it possible for us to play songs we don´t play live very often. It was quite inspiring. Playing abroad has also made for some memorable shows, but I will go with the release show this time around.

That is a very good question since I rarely remember conceiving the original song idea but I do remember the arrangement and recording process very well. In our band, the basic writing for a song is usually done in a quick manner. But the steps taken in order to explore its possibilities can sometimes be quite time consuming. Everybody has ideas and we need to try everything. We need to try a lot of instruments and make sure we don’t miss out on any different approaches, anything that could benefit a song better. If you are the main songwriter though, I think you will always fight to keep a certain amount of the direction you first envisioned.

What process do you utilize concerning the ordering and ultimate decision concerning whether you put a track on the album?

In many ways Vinyl Floor is a very democratic band. There´s a sort of unspoken expectation that each of us needs to bring in at least a handful of songs every time around, otherwise it will not be a Vinyl Floor album. We rarely disagree on what songs should make it or not because everyone is just so damn good at justifying his song´s presence, ha! We have many meetings about everything. ‘Sensational freedom country estate’ was let off of ‘Peninsula’ and at first I didn´t understand it, but I´ve later realized that the others were right. We just trust each other and there are no hard feelings, really. The song sequencing on ‘Vaudeville’ was hard to do because of the very diverse material. We went with perceiving the first half as the ‘in your face, rocking statement’ if you like. Then ‘Colorblind’ comes on and opens up the door of subconsciousness and everything is possible from then on. Pompously sounding indeed, but I like to see it that way.

We have kind of limited our social media use to primarily Facebook, Twitter and email accounts. We think we have everything we need. The former because of our fast and direct communication to the fans obviously, and the latter for business purposes. We communicate with people abroad, mostly. Apart from one meeting in London once, we cannot always be physically present and these digital platforms represent most of our business work. There´s a lot of desk work in this band.  The boring part of making music, ha.

What sort of plans does Vinyl Floor have for 2015?

We will do some promotion in the US for sure. Hopefully the UK as well. Play shows and release ‘Vaudeville’ on vinyl. And I have a feeling we will begin working on new songs as well.

Thanks a lot for having us! Listen to our music and stick with us. And we’ll stick around too!