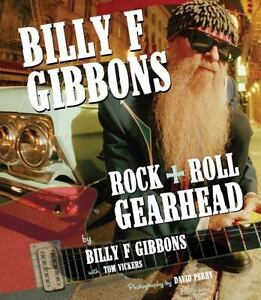 ZZ Top frontman Billy Gibbons is best known for three things: playing a mean guitar, his obsession with exotic hot rods (check out any band video from the ‘80s) and one of the most impressive beards in rock. His book, Billy F Gibbons: Rock + Roll Gearhead, tackles two out of three.

Initially out in 2011, this latest book is an expanded version with over 200 pages devoted to Gibbons impressive collection of hard-to-find and in some cases one-of-a-kind guitars (like the furry one), and even more impressive personal collection of vintage custom cars and hot rods. This beautiful hardcover coffee table book features stunning black and white and color pics of 60+ guitars and 15 cars and a write up of each.

In the nine years since the book first came out, Gibbons has added to his collection of both and some of the newer additions are included here. Among the guitars featured is his 1959 Gibson Les Paul Standard – a wildly sought after guitar no matter who has played it. Dubbed “Pearly Gates,” Gibbons has played it on every single ZZ Top record and it’s part of the foundation of their blues-heavy rock sound. The guitar is so well known that Gibson made an exact replica of the guitar, including all of his modifications over the years, to sell to the public.

The book’s release is timed to the 50th anniversary of “that little ol’ band from Texas.”