Dead Island Riptide is the new gold standard in zombie themed games. A number of efforts have suffered from the prominence of shows like The Walking Dead, meanging that companies are more than happy to slap zombie skins and elements on an unrelated title. Dead Island Riptide is a title that is able to appease all fans of the zombie genre while keeping the gameplay elements intuitive and immersive. The storyline is very serviceable and seems to be an improvement on the typical zombie film, while the replay value of the ensures that players will continually come back to the title. The only drawback that I could find is that the difficulty level will be a little on the high side for the younger subset of players. While ample amounts of play will destroy that hurdle, the game will be a slight bit intimidating on first grasp as players familiarize themselves.

Dead Island Riptide is a game that allows players to create their own character and outfit them with a range of skills, vehicles, and throw eir into the widest possible amount of weather and overall conditions. The free-style world in which players will find themselves is beautifully crafted and establishes something similar to real life while maintaining a completely different feel.

Make sure to pick up a copy of the Special Edition of Dead Island Riptide. There are a number of additional features that are included in this edition, including a bonus skin for the character, an intricate strategy map, and a steelbook case. Keep an eye out for Deep Silver’s upcoming titles through the rest of the year at their website. 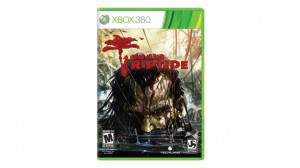