We’re sitting down with Braddock Station Garrison. Can you briefly introduce yourself to our readers at NeuFutur?

Greetings, readers! This is Steve and I am the lead singer and rhythm guitarist for Braddock Station Garrison. We are a melodic rock band from Washington DC. It’s great to be talking with you here! 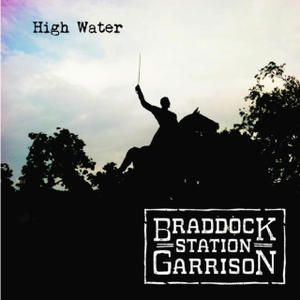 Which genres and performers most influenced you during the creation of the tracks on your latest release, High Water?

It runs the gamut. Songs like “A Lot To Ask”and “Fall”have been sitting in my notebook for over ten years, so they have a very REM meets Tom Petty vibe. “Maria With Child”is a newer song whose lyrics came to me in about five minutes the morning after watching West Side Story. “California Specific”started as a guitar exercise before morphing into a Jeff Buckley kind of thing. “Into Your Arms”was inspired by Blackfield.  The music to “Girl Gotta Gun”was written by our guitarist Tom. I thought it sounded like old school Aerosmith or KISS so I came up with some lyrics I felt fit that vibe. It’s become one of the songs we always play live because it has such great energy.

Briefly describe for us the process of recording and grouping the tracks on High Water.

We tried doing home recording but we really wanted to experience a bonafide recording studio. So we recorded at Inner Ear Studios in Arlington VA and were lucky to have Don Zientara record and mix our record. Don is a legend in the DC scene. He’s worked with Dave Grohl and the Foo Fighters and Fugazi and The Dismemberment Plan and Bad Brains and Jawbox and Shudder To Think and Minor Threat and all these other great bands. I was a bit intimidated because of all those bands and that we sound nothing like them. But Don was fantastic. Smart, professional, incredibly friendly and supportive of what we were doing. Probably the biggest compliment I have ever received was when Don told me I had a great voice.

We only spent two days in the studio, the first day we recorded and the second day we mixed. We had about fifteen songs to pick from so each of us ranked them 1 to 15 with 1 being our most favorite. I then took those lists and figured out which 6 scored the highest. We then made sure we were super tight on those songs. And it worked out. We did about three live takes for each of the 6 tracks. Then I went back and did the vocals. There are only a few overdubs on it. What you hear is pretty much the band playing live.

What is your recording setup (hardware and software)? What devices/programs would you ultimately like to utilize in the future?

We used some recording software on a laptop and a USB device to run the instruments into for our demos but I was not happy with the software. So I got a Tascam 32-track PortaStudio that we are going to use for our next record. For me, using the computer was a bit of a disconnect to the music. I would spend a second or two to figure out which way to click to turn the virtual dial. That doesn’t seem like much but when the song is running back and I am trying to find the right levels and mix, I don’t want to be thinking about where I need to point the mouse. The PortaStudio has sliders and knobs and things we can twiddle with. I feel like I am in better control of what I hear. I guess I am just old school…or just too lazy to learn to use the software! That with a little patience and some good microphones we can get a pretty good sounding record.

What trends have you noticed since your band began as someone intimately associated with the music industry?

Intimate is a strong word, but one thing I hear people talk about is the death of rock n roll. That guitar bands are on the way out. I don’t believe that one bit. I think it is cyclical. Kids these days seem to be into either big-time pop stars like Katy Perry and Beyonce and OneDirection or whatever they’re called, or they are into dance and electronic music. That’s stuff I just don’t get. I appreciate the talent and creativity it takes to make it but it is something I just don’t dig. But rock n roll is always going to be there is some form or fashion. A friend of mine was saying how there aren’t enough bands that rock like the Foo Fighters and I told him yes there are you just don’t hear them on the radio. There are so many great rock records out there. Popular bands like The Hold Steady and the Old 97s. Aimee Mann and Ted Leo have done an amazing record under the name The Both. There are small bands out there that are just killing it. Big Eyes and Destroy This Place and Cheap Girls are all awesome hard power pop bands that are just fantastic and young and showing that rock is doing just fine, no matter how many records Skrillex sells. I don’t like to really criticize other bands or acts or artists or whatever they qualify as. I think if you can listen to some music after a tough day and it makes you feel good and better about life, if it picks you up when you’re feeling shitty, then that’s a good thing.

How has your style evolved and changed over the time since each of you first picked up an instrument?

I started to play guitar when I was in my mid-to-late 20s. I have always been mostly a strummer. When I learned to play I was big into alt-country, so I would cover Ryan Adams and Wilco and Gram Parsons and The Byrds and Whiskeytown. Tons of Johnny Cash. This was all acoustic. I would do open mic nights or I would open local shows for bands of friends of mine. When Braddock Station Garrison formed it started as me and Tom doing acoustic numbers. We had known each other for a while but had never played music together. I had stopped playing for a a few years because I had dried up creatively and had no interest in doing covers anymore. All through that time he kept saying “we should jam!”but I was nervous because I didn’t think I was very good. Finally I said “OK”so I spent a few weeks remembering how to play, then went over to his house one Saturday with my acoustic guitar and my notebook full of songs. We ran through some of those old songs and it just clicked. Amazingly well. We played some parties, some open mics, a show with a musician neighbor of mine. It clicked so well we said let’s find a rhythm section, and that led us to Mike on drums and then first Patrick and now Jim on base. The coolest thing is to have these songs that started as acoustic numbers evolve into these rocking cuts. That’s what I love most about the band, is how every body in it puts their stamp on the song. Sometimes I will suggest a particular thing if I really feel strong about, but I love hearing what the guys come up with. That was a hard thing for me to do, because I treat my songs like my babies sometimes. I’ve learned to be more…I guess accepting is the best way to put it.

I guess word of mouth amongst our friends has been the most successful. Social media is something we use but it is really tough to break through with that. There’s so much out there it’s almost just noise. I find that when people hear us play they really like us. After one of our first shows Patrick said some of his friends told him they had come out for moral support and were very happy to discover how good we were. I took that as a nice compliment!

How can listeners contact you and find samples of High Water?

We are out there all over the world wide web. Our ReverbNation page is at http://www.braddockstationgarrison.com and our Facebook page is at http://www.facebook.com/braddockstationgarrison. We are on Twitter too: @BSGRockNRoll. Between that and the websites you can hear sound files and watch videos and see pictures of us doing our thing and find out when the next show is. Email works too: [email protected]  If you want to get a copy of High Water it is available for download on iTunes and Amazon and CDBaby and Bandcamp. It’s also streaming on Spotify and Rhapsody. We’d be super-excited for that!

The plan is to spend a day focusing on recording maybe two songs, really getting them to sound the way we want. Then mix those and toss them up on Bandcamp for people to hear. If we can do that maybe 4 or 5 times by the end of the year, we’ll send all the tracks to get mastered and put out another record by Christmas time. In the meantime we have two shows coming up: first we will be playing Desmond’s Tavern in New York City on Saturday May 31; then we’ll be part of the local acts supporting King’s X when they play Empire in Springfield, VA on Friday July 11. We are really excited for that! We shall see what other show opportunities pop up. Watching Facebook and Twitter is the best way to keep on top of it!

Do you have any final thoughts for our readers at NeuFutur?

Just to say thanks! to anybody who has made it this far! I hope you get a chance to check us out and hope you like what you hear! We would love to hear from you so LIKE us on Facebook or FOLLOW us on Twitter or just send an email asking to be put on the mailing list. Cheers!