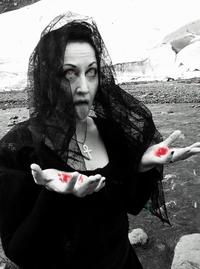 We were lucky enough to have a few moments with Alaska’s Cliff and Ivy. How has the Memorial Day weekend been for you?

It was good- a very sunny weekend, in alaska we have 24 hr (almost) sunlight in the summer. We just created a soundtrack for a local theater group doing Shakespeare’s Macbeth at Cyrano’s playhouse in Anchorage. It was directed by David Edgecombe, University of Alaska Theater professor, who created a new dark modern vision of the play. This was his last show before retirement. The play went on tour to other alaskan cities and towns. We spent much of our sunny spring exploring emotional darkness and putting it into music.

The music that you two make are deep enough to require listeners to fully immerse themselves into the band’s recording. What about your music separates you from bands that only require a surface listening?

The more you listen to it the more you can find in it. We approach the music with each element being part of a palette. We’ve been playing music together since 1984 (we were teenagers) so we have a natural complexity. We hear notes, passages and hooks on a gut level and this is how we songwrite. We write lyrics from a process of synesthesia. Ivy can see and feel colors associated with words, so she chooses them based on this sensory process and then they become assembled into a passage. Listeners tell us that they hear prophecy, surrealist poetry, and radical paganism in the lyrics! But this is part of a personal experience for them yet it is transformative.

We are Alaska’s only goth band. We know that we are not “for” everyone but our music could be heard by anyone. We can put different moods and feelings into music for movies, tv, games, or other environments. It’s up to us to decide what goth is in this place. There are plenty of dark themes and stories here, for it’s where the spirits dwell.

New Blood Old World is your latest album, but the story never begins and ends with an album. Can you give us a little bit about the act’s backstory?

We started out doing punk bands together, Ivy on drums and Cliff on guitar with different bands. In the 90s we played industrial music, and we were doing projects with Invisible Records (Martin Atkins) and Underground Inc (remixes and exclusive tracks).

We toured on the east coast and played the old North by Northwest festival. We did a cameo on a Pigface track called The Horse You Rode In On with Penn Jillette on it.

Although we played as a duo in California (Bay area) and Alaska, we did work with a 6 piece band when we toured in 2013. Our tour drummer was Don Bolles (The Germs, 45 Grave, currently with Ariel Pink) and we played in LA and area, and then on the east coast. There we recorded an ep (Springtide of Pure Reason) produced by KRAMER (Butthole Surfers, Ween, Low, Galaxie 500 and more). We worked with 3 Alaskan friends, Scott Feris (guitar, Alaska Thunderfunk), Stephanie Feris (backing vocals), and John Irving (synth) who toured with us. Rob Press (Unfinished Symphonies) played synth for us on that east coast tour.

This connected us with bigger scenes in the LA area and on the east coast. Alaska is isolated so we learned to reach out to people.

For New Blood Old World, we recorded this in Alaska in the studio of Peter Ratner who works with mainly classical and jazz musicians. The drums were tracked in New Jersey by our good friend Brian Troisi, a very experienced drummer and longtime friend who has done projects with Cliff Monk over the years.

More recently we’ve added performance art to our shows. We played on the street in downtown Anchorage, busking, and we played an outdoor festival. We made shadow-masks in the shape of animal faces and we used them while performing. We did descriptive singing and had some special music to go with it. We gave the masks out to the audience. People really enjoyed getting them and dancing behind their masks. We make goth /horror character dolls and diaolgue with them on stage. We do costumes and weird symbolic props that we interact with. One example is a stack of books that gets stabbed and oozes blood. We see it as another way to reach out to the audience and have art to interact with. Also people get to take some handmade masks home.

How has the band changed in the time that has passed from the first sessions to the post-New Blood Old World practices?

We played in punk bands when we started out- ivy on drums and Cliff on guitar. Our first band was called The Gout. We lived in New Jersey at the time so we got to see and play with a bunch of the 80’s hardcore bands and be in the scene. We played at CBGBs and went to tons of shows there. We played at the Court Tavern which grew to be like the “CBGBs of New Jersey”. We played with other hardcore bands like Pleased Youth and Adrenalin OD. We had a punk band called The Dolphin Room which was most often compared to X. As the 80s went on we had a band called Lesser Koodoo which moved into a dark punk, tribal, industrial, gothic psychedelic sound. We then formed as a rock/metal/industrial band called Parallax1, which toured as a duo and a band. Parallax1 showcased at the old NXNW festival in Portland.

We have changed lineups. 2010 we started Cliff and Ivy as a duo- we went to LA and recorded a demo with Ashley Witt, who worked on soundtracks with Tim Burton and Danny Elfman, he has music in the film Titanic, the Olympics and did session work U2, No Doubt and Fleetwood Mac. Our friend Toby Record had a label called All Ears, specializing in licensing for films. So we did this for this label, the result being the album Equilux.

Our currrent music is self released on our own label called House of Extreme Darkness.

As we have discussed, it seems that Cliff and Ivy is a very productive band. You have released a score to a theatre production of Macbeth. What should listeners expect from this title?

It’s creepy, haunting and magical. It was so great to see the actors engaging with our music and conveying the total tragedy aspect. This soundtrack will stick with you. Listeners tell us they get obsessed with some of them particularly the dream sequence ones and listen over and over… You can get it at www.cliffandivy.bandcamp.com

How can listeners listen of your music?

We do an internet radio show, called Extreme Darkness With Cliff and Ivy on www.wickedspinsradio.org – you can hear our music and we support other bands by playing their goth, punk, hardcore, metal and experimental music.

A little bit of an aside, what two or three bands would constitute a “dream lineup” for Cliff and Ivy to play alongside? What role does each act hold in the creation of the Cliff and Ivy sound?

Killing Joke. They are a huge influence on us. We met them on our honeymoon which was in London. We ran into Martin Atkins there by chance and he was playing with them at the time. We’ve known them since then and have seen them many times. They loom large in our legend.

Gitane Demone Quartet. Rikk Agnew (The Adolescents, DI, Christian Death and more), Gitane Demone (Christian Death), Paul Roessler (45 Grave, The Screamers) and the talented Deb Venom. They came to see us when we played in LA. It was an honor, as they are goth royalty. They are a great band and come from a similar musical wellspring!

Ministry. They bring the melding of industrial, hardcore punk and thrash metal. They sound like a motor. This has been go to music for us for years, bringing the aggression.

What does the rest of 2015 hold for you? Any sort of live dates in support of New Blood Old World?

More local gigs and working on the theatrical parts. We are making new music with a harder edged sound. We recently received a sponsorship from Sony corp which will allow us to work on better video and to do film score.

We are working on new music video.

We are in negotiations to do the soundtrack for a feature length Alaskan horror film called SEVEN BONES, By RocketJoe Films.

We are arranging for Fall showcases in the Los Angeles area.

We are hoping to do a short tour either in the US or UK next year.

Finally, do you have any thoughts for NeuFutur’s readers?

Never give up on your dreams. Music lasts a lifetime. We serve no master.