Intelligent Governance for the 21st Century: A Middle Way between West and East (Polity Press)

Berggruen and Gardels establish the current state of world politics as being bipolar. The consumer democracy present in the United States and the Confucian one-party (the “modern manderinate”) role of China represent two paths which new states can take, but each form of governance could stand to be approved; “while China…would need more participatory government and a more accountable meritocratic mandarinate to achieve balance, the United States would need a more depoliticized democracy” (13). An alternative form of governance to those existing must devolve power from the ruling classes and involve those groups excluded from governance. 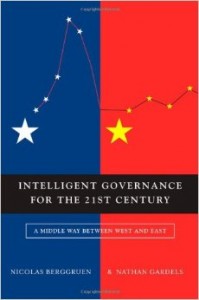 The authors compare and contrast the United States and China to allow for a better understanding of the weaknesses and strengths that are inherent in each of the country’s methods of leadership (21). Discussing Fukuyama (2001) and Weiwei (2012), Berggruen and Gardels establish that neither of the established frameworks represent a best case for states attempting to adopt governance structures from either country.

Far from privileging the position of the United States or China, the pair conceptualizes a new framework for states. Intelligent governance attempts to solve problems inherent both in representative democracies and one-party systems. The benefits of adopting intelligent governance in a country would accrue to the citizenry and the government. The establishment of an “accountable meritocracy” would be essential for the continued success of the state (104). The meritocracy would be kept limber by the aeration of the bureaucracy through term limits; Berggruen and Gardels claim that employment in a bureaucracy at a period greater than a decade promotes agency capture and cronyism.

Berggruen and Gardels conclude Intelligent Governance for the 21st Century with three case studies – California, the G-20 states, and Europe. Each chapter describes the specific array of governance problems that are present in each governance structure and how their proposed system of intelligent governance could be utilized to ameliorate these issues.  The authors discuss an alternative form of organization for the Californian state government that would collapse the state Senate and Assembly into a unicameral body. As the amount of constituents per member would decrease considerably, the legislature would become more responsive to citizen needs.

The G-20 represents a form of global governance that struggles due to organizational inefficiency. The increase in the amount of countries during the switch-over from the G-7 to the G-20 meant that the organization had to coordinate states with different levels of democracy, types of governance, and overall goals and desires for the organization (150). With this array of desires for the group, constituent members have not placed authority in the G-20. Berggruen and Gardels suggest that past and present G-20 leaders meet to increase continuity between summits. Working groups should be established in policy fields to successfully guide G-20 leadership (160). As “a web of national and subnational networks should be fostered to provide global public goods,” regional organizations should be fostered and coordinated under this reformed G-20 organization.

The European Union suffers from the effects of powerful economic recession exacerbated by the adoption of the Euro. This is a protracted crisis as the European Union does not possess the authority required to transform the region’s economic fortunes. Unifying the governance institutions of the member states into a federal union is the policy recommendation of Berggruen and Gardels. A European Union-wide budget would be crafted in the European Commission, EU-wide taxes would be levied, and the resulting federalist structure would be able to successfully navigate an array of crises.

The intelligent governance framework establishes a Platonic ideal to which states and extra-state actors can strive. The major concern about this conception of governance comes in the initial provision of positions by the members of society. A system of governance, be it democratic, autocratic, or monarchic, has been entrenched as the “way things are done”. The continued prevalence of parochial and crony capitalism states despite wide-spread distaste between classes for these types of governments provides some insight for the difficulty of adopting the intelligent governance framework. The average citizen possesses a considerable amount of power in the intelligent governance system. The lower level of the legislature is directly elected by the populace, while the citizenry has an unofficial role as a “monitory webocracy”. Berggruen and Gardel point toward the ability of weibu users in the Chinese context to influence government policy through the description of party excesses.

Berggruen and Gardels provide a set of policies for leaders unable to completely jettison their current form of governance; the involve-devolve mantra that the duo describe could be adopted at any government level. The intelligent governance blueprint utilizes firm numbers and exhaustively explains the structure of the political system while providing examples of how the structure could be utilized by world and regional actors, nongovernmental actors and intergovernmental organizations.

The scholars conclude that transition to intelligent governance is a possibility, as long as the affected populace feels as if this shift is required. By changing the paradigm under which society operates, citizens will be able to adopt the intelligent governance framework. The pair stress that conversion to this mode of government will attempt to address the inequalities that exist in society but that their framework should not be considered a panacea for states in search of a governance solution. The increased activity of the world’s citizenry on internet and communications technologies allow for the philosophy to be quickly and completely disseminated throughout the world, while facilitating discussion about the changes needed for each specific country.

Intelligent Governance for the 21st Century: A Middle Way between West and East. By Nicolas Berggruen and Nathan Gardels. (Polity Press, 2013.)