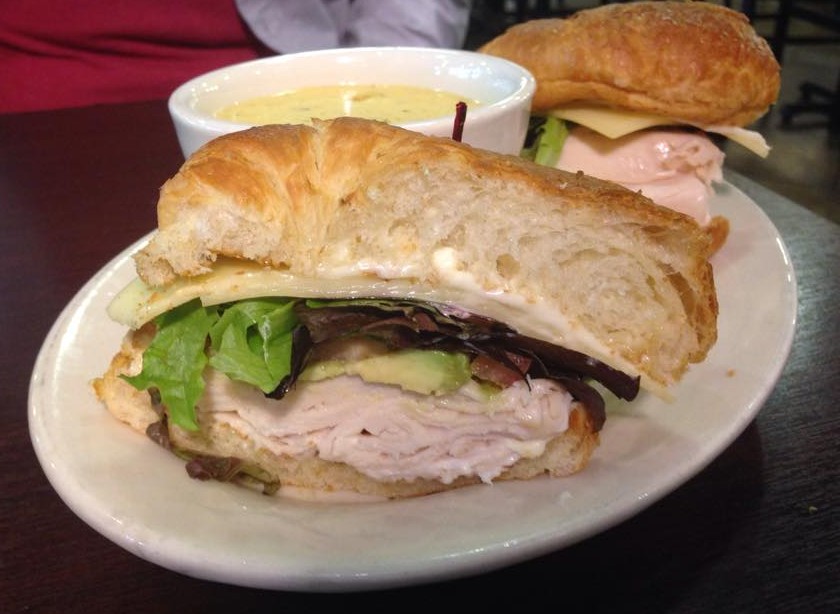 Jason’s Deli in Polaris (Columbus, Ohio area) was a surprisingly-impressive experience when one considers that a couple can eat in at the restaurant for around $20. The ordering process is simple and allows for a great variant of customization, no matter whether one orders one of the restaurant’s dishes or chooses to craft their own sandwich. The restaurant has a large amount of freebies, including a bevy of crackers, pickles, and ice cream. As it was our first time at the restaurant, we were visited a number of times by a staff member to make sure our meal was exceeding our expectations.

The Wild Salmon-wich ($8.49) is served on Jason Deli’s herb focaccia bread and contains a sockeye salmon filet with a creamy guacamole, lettuce, Roma tomatoes, and a chipotle aioli. There is a hearty side to the salmon that is given further depth with the presence of the guac and aioli. The dish is rounded out through a variety of potential sides, which include steamed veggies (pictured), blue corn tortilla chips, or baked chips.

California Club ($7.49) is one of the most jam-packed sandwiches that Jason’s Deli offers. Tying together roasted turkey with bacon, field greens, guacamole, tomato, and Swiss cheese, the layered approach that the restaurant offers here makes for a filling sandwich that one may need to bring home for seconds. A side salad bar can be added to any entree for $4.59 (purchased separately, it is $8.29).

The California Club is paired well with a cup of the Broccoli Cheese soup (a la carte, $3.49 for a cup, $4.99 for a bowl), a thick and creamy offering with good broccoli content. This soup is not overly salty but still packs a large amount of vegetable flavor.

The menu at Jason’s Deli includes calories for each type of dish (full or lighter portions), making it incredibly easy for health-conscious visitors to find the right meal. While we only had the chance to sample two of Jason Deli’s entrees, there were so many different dishes that the restaurant offers that makes a second visit most likely. The menu is rounded out with a wide variety of salads (Chicken Club, Nutty, Chicken Ceasar, and Taco Salads). For those that choose to go meat-less, Jason’s Deli has a considerable portion of their menu dedicated to vegetarian items (e.g. a Spinach veggie wrap, Zucchini Garden Pasta, Caprese Panini, and fresh fruit cups). Perhaps our biggest regret was not ordering one of Jason Deli’s signature sandwiches, their take on a Muffaletta. The restaurant offers ham &salami and turkey variants of the sandwich. After one tops themselves off with a free cup of Jason’s Deli’s ice cream, the restaurant includes a number of desserts that are ample in size. We purchased a Strawberry Shortcake which used real whipped cream, the strawberries were fresh, and the cake was spongey with a good amount of bite-back. The Polaris-Columbus, Ohio Jason’s Deli is open from 10 AM to 10 PM, seven days a week. The restaurant is large and inviting while having a close and comfy feel.