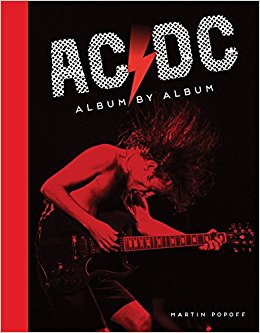 The timing of Martin Popoff’s latest AC/DC book comes at a rough time for fans of Australia’s greatest hard rock export.After 35 years of service, singer Brian Johnson was unceremoniously kicked out of the band last year after his doctors warned of worsening hearing loss. He was quickly replaced by Axl Rose; longtime drummer Phil Rudd was out in 2014 and falling into some crazed meth plan that had him up on charges of attempted murder; Bassist Cliff Williams left in 2016 shortly after Johnson; and saddest of all, co-founder and rhythm guitarist Malcolm Young passed away earlier this year.

With some of that recent history as the backdrop, Popoff, one of the most prolific chroniclers of heavy metal and hard rock, set out to dissect the catalog of AC/DC. The result, though clearly only appealing to fans of the band’s music, is a fascinating, humorous and addictive study of AC/DC’s output over the years.

Album by album, Popoff along with a revolving cast of AC/DC fans (journalists, musicians, and in one chapter, Rudd himself) talk about the songs, the reception each album had and the lasting impact of each. Sort of a McLaughlin Group of headbangers. The detail provided here is exhaustive, with discussions of song order and album art differences country to country in some instances and the types of guitar tunings used in the studio; Geeky stuff, but, if you’re a fan of the band, the content here is simply catnip; A group of knowledgeable people talking passionately about one of hard rock’s most influential bands. Though AC/DC is pretty much over at this point, Popoff’s latest is a welcome distraction to diehard devotees of the group.