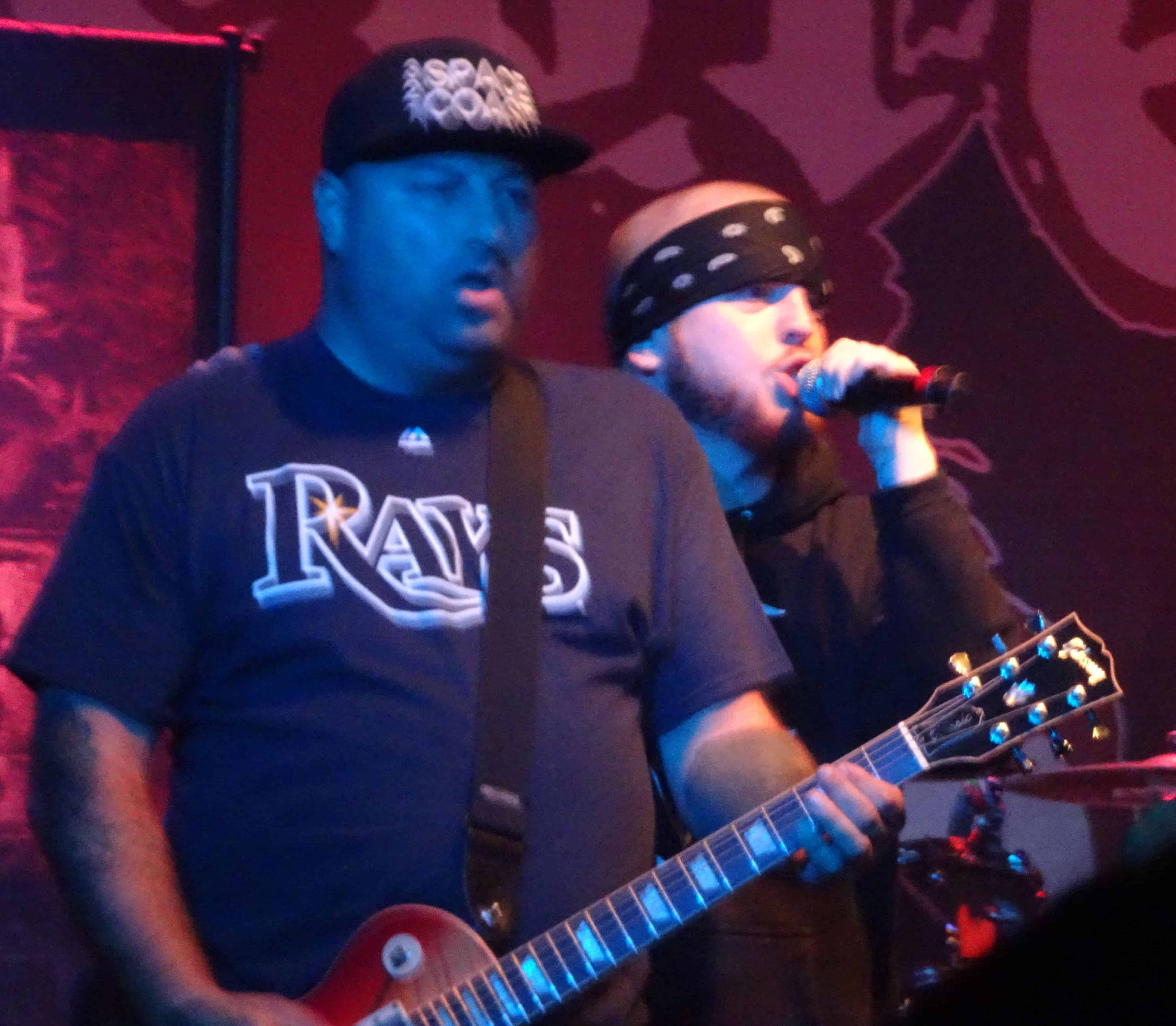 Hatebreed destroyed everything in their wake with their performance at the State Theater. The tour was billed as “20 Years of Desire & 15 Years of Perseverance”, paying homage to their first and second studio albums, so it was with great anticipation in the days and weeks leading up to the show knowing the set list would favor heavily from those two kick ass releases. Sadly I did not arrive at the venue in time to see the first two opening bands, Twitching Tongues, and Code Orange, but I knew we were in for a treat with death metal heavyweights Dying Fetus about to hit the stage to stir up the crowd for Hatebreed. Dying Fetus lands more on the technical death metal branch of the musical tree and myself being a people watcher at shows it is interesting to see people’s reaction to a death metal band if they are not really that familiar with the gruffness of the vocals in the genre. Just as Dying Fetus was about to start I heard someone mention to their show companion how “I’ll give them one song…”, presumably before retiring to the bar or even outside and await the headliner in case they were not to his musical liking. I noticed he stayed for their entire neck breaking set! Death metal is not for everyone, but I sure love how heavy this band is live. Dying Fetus was supporting their new release “Wrong One to Fuck With”, and while I had not heard anything off of their new CD, I can say for sure the new stuff they played live sounded killer. Brutal, technical and heavy. They were well represented by all of the band’s shirts I saw fans wearing and slayed through a ten song set list that mixed in songs across six of their eight studio albums. It was my second time seeing them and I eagerly await my third show of theirs, hopefully as headliner so they have a longer set. As it was nearing time for the headliners, switching from the staple random song played between bands, holiday classic Christmas music suddenly came over the venue’s speakers preceding the house lights dimming and Hatebreed taking the stage. I thought to myself what better way to get into the holiday spirit than with one of my favorite bands about to unleash a knockout brute force mix of heavy metal and hardcore punk, while lyrically delivering a message of positivity to us all about believing in yourself, taking control of your own actions, destiny and forwarding one’s life path. This show was a reaffirmation about this band being my own form of personal empowerment therapy, and from the size and ferocity of the mosh pit as well as the crowd’s reaction every song I can see I am not alone in that line of thinking. Their tried and true crossover heavy sound is one that their fans cannot seem to get enough of as evident when lead singer Jamie Jasta announced between songs that their first single off of their latest release, “The Concrete Confessional”, has been the highest charting song of their career. Then we were treated to my personal favorite off of the new CD, “Looking down the Barrel of Today”.

As expected, songs off of “Satisfaction Is the Death of Desire” and “Perseverance” made up the majority of the set list and we were treated to my personal favorite song of theirs “Destroy Everything”. While it may be hard for some people unfamiliar with them to hear the positive and empowering messages behind and within their music, their songs speak to me and I was hooked as a fan as soon as I discovered them. Not having any idea who they were or what they sounded like I saw them open for Slayer in 2002 and it was another instance of me not being familiar with an opening band and being blown away by what I heard and an instant fan.

As with many bands that have been around twenty plus years, Hatebreed has gone through some lineup changes over the years and of note for this show (and probably the whole tour), Sean Martin, Hatebreed’s guitarist on the “Perseverance” release and now guitarist for opener Twisting Tongues came out on stage to a big reaction from the crowd and guest performed along with the band for the last two songs. With this being my seventh time seeing Hatebreed I can say from this experience as well as the past six, this band gives their all on stage while connecting and interacting with the fans. The brutality and positivity of Hatebreed’s music is its own art form and you can see on their faces as the band performs, their own passion for their music and their love for each and every one of us being there to see the show.