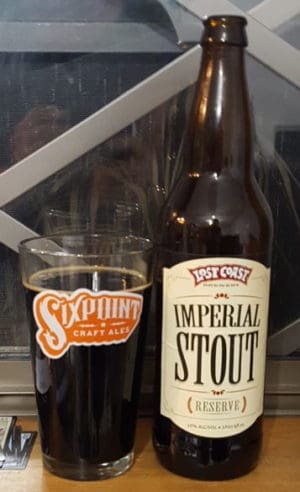 The tendency throughout craft brewers in the United States has been to move to incredibly sweet, “bakery”-style imperial stouts. To experience a stout that has a sharp, bitter element to it is much less common than its used to be. We were lucky enough to receive a bottle of Lost Coast’s Imperial Stout a few weeks back and had a moment to crack it.

The beer pours with a dark brown coloration and only the smallest amount of tannish head. Lost Coast’s Imperial Stout has an initial nose that yields hints of coffee, chocolate, and roasted nuts. When one is able to take their first sip of the brew, they will be introduced to a goodly amount of dark fruits, toasted male, and enough of the way of bitterness contributed by the hops to refresh one’s palette afterwards. With the bomber (22 ounce) we received, we were astonished at how consist this Imperial Stout stayed. Each element remained in focus throughout the beer rather than shifting into a more muddied format. Furthermore, Lost Coast’s Imperial Stout started to gain a bit of an additional chorus of flavors along the way. Along with rich cacao and brown sugar elements, bits of caramel and even a smaller amount of acidity peeked their way through before this bottle was finished. This imperial stout would be matched well with rich-flavored cuisine (e.g. Indian, Thai) or alongside assertive cheeses or salty fare. Lost Coast shows that they can go back to a traditional style and make things tremendously interesting and tasty.

For additional information concerning the brewery, their year-round and seasonal brews, or anything in the way of  new product announcements, give their main domain and social media profiles a spin. We covered Lost Coast’s double IPA, Fogcutter, late in 2017.