Lemon Jail: On the Road with The Replacements by Bill Sullivan 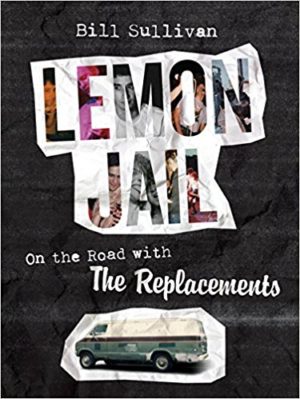 Over the years, Bill Sullivan has served as tour manager for bands like Soul Asylum, Bright Eyes, Yo La Tengo, The New Pornographers and many more. All were clearly a walk in the park, compared to his first gig in music, a roadie for The Replacements, quite possibly the most self-destructive band in the history of rock.

His tenure with the band started in 1983, when the group was just another Midwest punk rock four-some figuring out their sound, up through ’86, when the band was building a strong following across the country and had just signed to a major label – bucking the changes the whole time.

The Replacements were notorious for their bad behavior – onstage and off – and Sullivan is certainly not one to make excuses for the band here, detailing their stubborn, often bratty antics. But the criticism here comes with obvious affection of the band. Even when they were making his job miserable, Sullivan still sides with the band and refrains from using this book as an excuse to call the members out on their behavior (to be fair, I don’t think even they deny what assholes they were a lot of the time) or settle scores. Rather Sullivan uses the 150 pages, give or take, to reminisce on what was clearly a remarkable and remarkably chaotic gig that set him up for a future on the road with rock bands. He fills out the book with 100 never-before seen pics he took along the way

Though over the years there have been a lot of great books written about The Replacements (the best, being Bob Mehr’s Trouble Boys), Lemon Jail is a must-read for any Replacements’ fans; it’s deeply personal and a fun ride.

Lemon Jail: On the Road with The Replacements by Bill Sullivan/Hardcover, 147 pages/University of Minnesota Press/2018