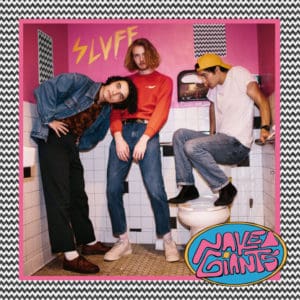 On repeated listens you can hear everyone from The Pixies to The Black Keys on the debut from Seattle-based trio Naked Giants. And despite the slew of bands who have name checked those groups over the years, there is a genuine connection on the part of Naked Giants. While it’s not particularly hard to simply ape another band’s sound, on “Sluff,” these guys seem to have internalized the endearing, shambolic noise of their predecessors and used it as a foundation to build upon, adding in their own touches.

The result can be heard all over tracks like the joyfully chaotic “Everybody Thinks They Know (But No One Really Knows)” or the quirky, synth-heavy garage rocker like “TV”; They manage to bring a ring of familiarity while still sounding impressively original. Similarly, the slow-burn funk on “Slow Dance II” goes a long way to prove these guys are more than just a glorified cover band

Any fears that three people can’t make a lot of noise is easily dismissed by the first track. Playing twice as hard as larger groups, Naked Giants are determined to leave a mark.