Black & Blue: Love, Sport and the Art of Empowerment by Andra Douglas 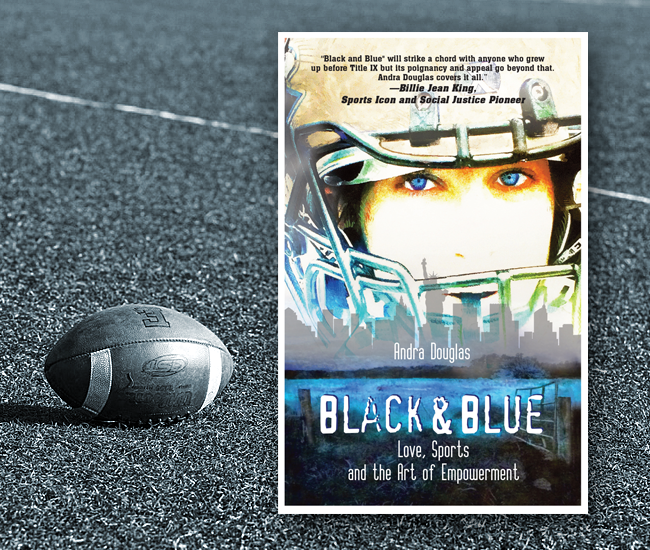 Black & Blue: Love, Sport and the Art of Empowerment is Andra Douglas’ fictionalized rendering of a lifetime loving the game of football and being told she couldn’t play. Good thing for us she never took those words to heart. Readers are treated to an often picturesque account of her upbringing in the American South, her relocation to New York City to pursue a career in the early Eighties, and her later role as one of the leading figures establishing women’s professional football in the national consciousness. It is too easy to say this is an inspirational story. It is, of course, but there’s so much more to it. This is the story of a society in flux, undergoing profound transformation, and football is the backdrop for this particular example of that change. It is also a personal but not uncommon story of someone told from an early age to jettison their deepest held dreams because they aren’t “allowed” to harbor such ambitions and how the human spirit balks at such inane restrictions.

She makes no bones about how difficult it was for her to get women’s professional football taken seriously. Sponsors are either lukewarm or else disguising their financial/sexual interest in women’s professional sports as a sincere belief in equality. Romantic partners object, parents are baffled and dismayed. Douglas’ fictionalized version of herself perseveres however, enduring life’s slings and arrows, and derives a personal satisfaction from being true to herself that approval from others can never match. Black & Blue does many things in an outstanding way, but its depiction of the author’s resolute character in the face of one adversity after another is dramatic and believable at every turn.

There is no real conclusion to this story. However, like any great fictional work imitates life, Douglas ends the book transformed by her experiences as both an athlete and owner. She has walked the front lines of a revolution in sport and her eyewitness account of incurring casualties and bonding with other like-minded souls, both men and women, along the way gives this book much of its life. It never feels ham-fisted ot riddled with affectations. The story of women’s professional football, however, doesn’t end with Douglas stepping away from the team after nineteen years. The book makes it clear she and others laid a foundation that will continue growing far and long after the book’s final pages.

Black & Blue: Love, Sport and the Art of Empowerment is part testimonial, part memoir, part sports fiction. Andra Douglas brings the sweat and crunch of an uniquely American sport to vivid life populated by a cast of characters that are difficult to forget. She has turned to other pursuits since her tenure as owner of the New York Sharks ended, but you can still feel the obvious love she has for this game. Her book is wise, knowing, and filled with a rush of energy carrying readers through from its humble beginnings to an ultimately triumphant conclusion that leaves a smile on your face.