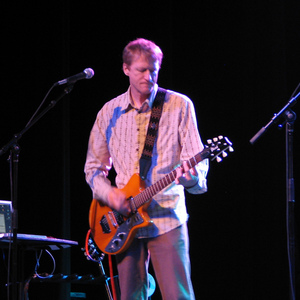 Springsteen’s got nothing on David Lowery… well, at the very least, Lowery would have no problems keeping up with Bruce’s legendary reputation for on stage stamina.

Lowery played two complete sets to a full capacity crowd at Philadelphia World Café Live recently, first playing a career-spanning set from Camper Van Beethoven and then taking the stage with an almost entirely different line up about 20 minutes later for an even more raucous set playing songs from his post-CVB band Cracker.

What’s remarkable, is that the both shows were impressive enough to capture fans of both bands, with the audience hitting peak excitement just a few songs into CVB’s act and keeping that enthusiasm up until the final song in Cracker’s set. It helps, that both bands stuck to fan favorites, with Lowery and his first group starting off the night with the cult “hit” “Take the Skinheads Bowling.”

Lowery self-effacing as ever apologetically announced every guitar solo with a sheepish “Here’s another guitar solo” before ripping out fantastic guitar god-level licks. The CVB set included a solid Status Quo cover (“Picture of Matchstick Men”), as well as an impressive instrumental, “S.P 37957 Medley” that included Zeppelin’s ‘Kashmir” segueing into “Hava Naglia”.

After a surprisingly brief break, Cracker guitarist Johnny Hickman played an acoustic song off his new album and then Lowery and his drummer came back on stage, joined by the rest of the members of Cracker for an equally impressive run through of more than a dozen songs. The set began with a great version of Jerry Garcia’s “loser” that thankfully did not sound like a Garcia song and immediately went into the stellar “King of Bakersfield,” off of Cracker’s last album.

As Cracker was the more well known of Lowery’s two bands and as a result had more radio “hits,” they naturally had more crowd singalongs that night, including “Teen Angst (What The World Needs),” “Low” and a truly remarkable version of “I Want Everything”. Through it all, Lowery showed remarkable endurance throughout the night, bringing joy to a crammed room full of aging cynical Gen Xers.