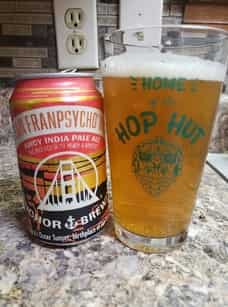 2020 marks the third time that Anchor Brewing and San Franpsycho have teamed up to create an India Pale Ale that exemplifies the spirit of the city. This time around, the duo have released an IPA that utilizes apricots and peaches to give a little tartness to the oftentimes sweeter juicy IPA style. The brew pours with a darker yellow / goldenrod coloration and a little less than a finger’s worth of whitish head. The floral and fruity notes on the onset (contributed by Eureka, Cascade, El Dorado and Simcoe Cryo) gradually open up into a mouthfeel that includes wheat and malt elements.

Tagged at a 6.3% ABV, San Franpsycho IPA is able to simultaneously work well as an after-hours crushable beer as well as one that can be paired with a wide variety of cuisines and experiences. Rather than dropping most of its bitter elements after it warms to room temperature, San Franpsycho is able to keep a cohesive array of hoppy and fruit-forward notes even as the can (or draught pour) warms to room temperature. San Franpsycho’s juicy and fruity sides amplify the flavors of a pad thai or lemon chicken just as it provides a stellar set-off for a sparkling jello. The effort is a rare example of one that will appease the hop heads that want to be zapped with mountains of bitterness as well as those individuals that want something closer to the archetypal ales that have crowded store shelves for the better part of 100 years.

San Franpsycho will be available through September 2020 but will likely maintain its varied collection of flavors to a high degree through October or November. For additional information about the entirety of Anchor’s year-round and seasonal offerings, visit their social media profiles.