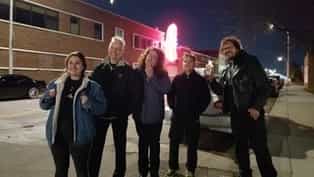 Today, we are speaking with Chicago pop/punk act Dead Freddie.

Can you give us a little background information about yourselves?

The current members of the band are: Gintas Buinevicius on Drums, Guitar and Backing Vocals, Gary Vacha on Guitar and Backing Vocals, Karl Sperling on Bass Guitar and Backing Vocals, Sam Steagerman on Trombone and backing vocals and Donatas Ramanauskas on Lead Vocals and the occasional Punk Accordion.  Gintas, Gary, Sam and Donatas all grew up in the Chicago area or Chicago proper, while Karl’s roots are in the Philadelphia area of Pennsylvania.  Gintas has the second longest tenure in Dead Freddie, since 2013.  Prior to Dead Freddie, he was in numerous bands, acting as drummer and/or guitarist.  In addition to these roles, he is the most prolific song writer of the current line-up of the band.  Gary Vacha, who came to Dead Freddie in 2019, also has a storied past with many Chicago bands spanning nearly three decades, most recently with the now-defunct Headspins.  Dead Freddie is very fortunate to have his guitar chops and so many great band and show stories-a real veteran of the Chicago band trenches! Sam (Samantha) also joined Dead Freddie in 2019.  She is by far the youngest member of the line-up, which in no way diminishes her skills on the trombone!  Karl is the most recent arrival. A multi-instrumentalist, he slid right in to the position of bass guitarist at just the right moment, with the band not missing a beat or a show.

What was the process by which you got into playing music?

There really are two parts to the Dead Freddie story.  The original members of the line-up of Dead Freddie Band, who’s genesis dates back to 1978, were all children of Lithuanian immigrants who arrived in Chicago after WWII.  As kids, we all were immersed in the preservation of Lithuanian culture, which included attending Lithuanian school on Saturdays, where we learned to sing all manner of traditional and patriotic Lithuanian songs.  That’s where the earliest part of the process by which we got into playing music began.  That, plus seven years of accordion lessons during grammar school years.  As we reached our teen years, we continued on in to Lithuanian folk dance and choir, mostly as a social network, with some ethnic culture tossed in.  Of course, we did not live in a total cultural vacuum.  We listened to plenty of Chicago radio and went to see numerous concerts, including The Who, Bruce Springsteen, Led Zeppelin, The Rolling Stones and later the likes of Elvis Costello, Boomtown Rats, The Pretenders, Iggy Pop, The Ramones and David Bowie.  The influence of radio and live concerts combined with basic musical skills form cultural activities laid the foundation for the first go around of Dead Freddie band.  Some grabbed guitars, others jumped on drums while others a microphone.

Part Two of the process really began in 2013, when Gintas Buinevicius, Regina Ramanauskas (daughter of Donatas), Leonas Putrius and Ed Saulis came together and started working on original songs penned mostly by Gintas.  Between the 1980’s and the 2010’s we had all absorbed many musical influence, while retaining some of our earliest influences as well.

How has the band changed since your initial run around in the 1980s and today?

The line-up of the band has changed greatly since the initial run around in the 1980’s.  Donatas is the only member from the original group that remains in today’s line-up. He, along with Vainis Aleksa (the main creative force and guitarist), Al Plioplys (lead guitarist), Vitas Plioplys (bass guitarist and younger brother of Al) and Juozas Mikuzis (drummer and boyhood friend of the Plioplys brothers) all went their own ways by the early 1980s.  In retrospect, we were lucky to last as long as we did, considering the average lifespan for early Punk bands.  The idea for reuniting the original line-up resurfaced in 2000 (20-year anniversary) and 2005 (25-year mark), never gained traction.  Not until 2011 did some form of Dead Freddie come back from the beyond.  Invited, dared and challenged to re-unite the band for a cultural fundraiser, Donatas again failed to pull together any of the original members, so others were recruited to learn the music and play the first show in 2012 (Donatas Ramanauskas, Regina Ramanauskas, TJ Petry, Ed Saulis and Tom “Mulz” Mulhern).  Two more annual fundraisers were played in 2013 and 2014 before a full-time line-up was established in early 2015, with the intent of regular performances and recording of original material. (Donatas Ramanauskas, Gintas Buinevicius, Leonas Putrius, Ed Saulis, Julius Lietuvninkas). The line-up shifted a bit for the recording of our first release, the EP “If I Knew What I Wanted” (Donatas Ramanauskas, Gintas Buinevicius, Leo Putrius, Nick DuBois).  And yet another shuffle took place for the recording the self-titled LP “Dead Freddie” (Donatas Ramanauskas, Gintas Buinevicius, Steve Foley, Joe Wood).And finally, the line-up that is Dead Freddie today: Donatas Ramanauskas, Gintas Buinevicius, Gary Vacha, Sam Steagerman and Karl Sperling.  And while the composition of band membership has continued to shift over time, the DNA of the original “vibe” and sound is what forms the body and soul of Dead Freddie.

What does your recording set up look like (e.g. what do you use to record, what are your favorite tools)?

Rough demos are generally recorded at the residence of band member Gintas Buinevicius and is fondly referred to as Not-Too-Shabby Studios. In reality it is set up in a corner of his home that originally was the dining room! Gintas primarily uses Sound Forge to cobble together preliminary recordings.  When it was time to record the EP in 2016, we went to Bricktop Studios in Chicago and enlisted the professional services of Pete Grossmann as sound engineer and producer.  For the 2018 LP “Dead Freddie” we went to Sonic Palace in Oak Park, IL and worked with Matt Mercado as sound engineer and producer.  Both had full-service facilities including drums, amps and all manner of recording equipment.

What is objectively different between your If I Knew What I Wanted and self-titled albums?

“If I Knew What I Wanted” is a six-song EP.  It was our first dip of the toe in to the waters of recording of our music.  Good, solid songs with nothing too elaborate, ones we knew inside out, our favorites.  Pete Grossmann was able to record three songs each day on two consecutive days and mix the tracks on the third day-boom, finished, send to Trevor Sadler for mastering the following week.  We were well prepared with exactly how we wanted to play the songs, which certainly helped accelerate the recording process.  With “Dead Freddie” (2018), we went in with a more open-ended approach.  What was initially planned to be another 6-track EP, morphed in to a 12-track LP.  Sonically, one of the major differences between the EP and the LP is the addition of accordion on many of the LP tracks.  We also enlisted Max Crawford of Poi Dog Pondering to add horn parts on two of the tracks.  The entire recording process spanned a period of six months, based on availability of studio time and Matt Mercado’s schedule.  While we had some specific ideas on how we wanted each track to sound, there was significant input from all band members, plus Matt (with actual band experience as guitarist and vocalist in Daisy Chain and Mindbomb), as to how the final recording actually turned out, in some cases quite different from the rough demo.

What has the reception been for your self-titled album?

Our local following in the Chicago area has given a warm reception to “Dead Freddie”, grabbing copies at many of our local shows.  A decent amount of radio airplay has also helped widen the exposure of the record.  Media coverage in the Chicago Reader and other online publications continues to expand awareness of the LP.

How has the current pandemic changed your approach to creating music and playing to audiences?

Living in the time of the pandemic has certainly changed how we create music and play to audiences.  Gintas Buinevicius has remained the face of the band, playing solo acoustic guitar sets every Sunday night since mid-March 2020, coined the “Virtual Variety Show”, where he plays not just Dead Freddie songs, but just about every other original and cover song he knows to keep us in front of our audiences on YouTube LIVE.  Now, with some slight relaxation of lock-down restrictions, plans are in the works for Donatas and Gintas to do a Dead Freddie Acoustic Duo show on Facebook in the near future.  If that works out well, we may then do a literal garage concert with the full band, while following safety guidelines.  In the meantime, we continue to rehearse at home, working on staying sharp on Dead Freddie material as well as contemplating some cover songs to sprinkle in to our live sets, when the time comes.

Forty years later…Why do I still do it? I always felt something was missing and left undone with the original line-up.  In the “Rocky” movie “Rocky Balboa”, Rocky’s brother-in-law asks Rocky, why, at this late date, does he still want to get in a ring with a much younger fighter, the current champion.  Rocky’s response was that he still has “something in the basement”, gesturing towards his stomach, meaning that he still feels something about fighting.  When things began to come together in 2011 for the second coming of Dead Freddie, I too felt like I still had “something in the basement”.  And to quote the Poi Dog Pondering song “Gonna get it right this time”, I began looking for closure: to record the “legacy” material of Dead Freddie; to spread the Dead Freddie “vibe” in the greater musical community of Chicago (and possibly beyond).  It’s been a long road, but we are still on the bus driving down that road.  Most importantly, I think we still all get a charge when the music works, whether in a basement or on a stage, and it connects with those around us, whether it’s just our band mates or a huge audience.  It’s still fun.

When will I stop?  I will be ready to let go when we play a small-ish club, packed with die-hard supporters, that know all the words to all the songs and sing along on everyone. That’s when I’ll know that I’ve touched someone with our music and that’s what it’s really all about.