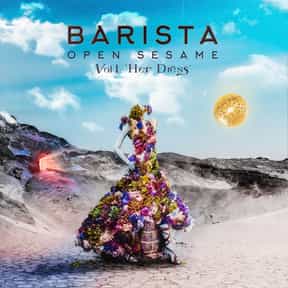 It’s always fun keeping tabs on an artist between releases. You really get to feel like you’re alongside a journey with them as they hone their musical craft and the journey from 2014’s Daydream to Open Sesame, Vol. 1 Her Dress singer/songwriter Barista has truly become an unstoppable force of nature. While maintaining a rock and pop edge to him, there are hints of the kind of poetry word working you’d hear from the likes of Leonard Cohen and Lou Reed who he also matches by being as personal as them.

Barista makes worlds with each of his songs that feel deeply lived in and consistently compelling. I think there’s a strong priority on Barista to live a life as much as he can craft music because he knows they’ll feed into each other. The themes are universal and there’s definitely an emphasis on unity which is what he wanted, but you can feel the rich pathos like in the track “Watching the End Begin, Part 1 (Coffee Song)” which feels like sitting in with a disgruntled friend as they watch the world burn. It’s also certainly topical given the last year and a half and what many of us have had to deal with. You can tell that his songs are trying to make a point and seem to reference plenty of real-life happenings or allude to certain cultural moments, but it never feels preachy which is so refreshing in a time when most indie releases seem to just be “2020, what a year am I right?”.

One of the biggest compliments I can give the record to is just how easy Barista makes the whole production feel. I’m sure this was painstakingly crafted and slaved over but it feels like the kind of release only a master would drop at this point in his career. This is probably also helped by the incredible assortment of collaborators and the seemingly endless music reference points and ideas they’re all drawing from. I do wish the album was a little longer as sometimes it feels like a glorified EP, but god what a way to witness its true glory. Barista’s voice has this way of going from deeply gruff and tired to this seemingly sweet endearing performance but never making the two sound like they’re from radically different people. That’s actually a good way to describe the album overall which is that they’re all distinct pieces that when wedged together create an impressive whole. It’s a truly unforgettable experience that I think is the best indicator of what’s to come from Barista and hopefully the momentum will only build on what’s been established here.

I really want to see him continue to explore the various genres he has and I’m sure judging by the response to this album, he’ll no doubt lean into the aspects people really gravitated towards most, but I hope he maintains his sense of an experimental nature. It’s a special one-in-a-lifetime listen that’s sure to shock anyone. Kim Muncie