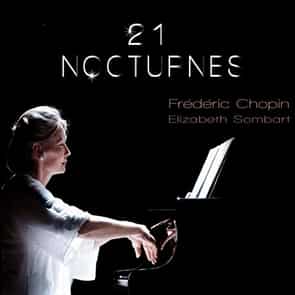 The breathtaking gaze of the piano is rivaled only by the perfectly timed tempos in the new album Singing the Nocturnes from Chopin impressionist Elizabeth Sombart, but this isn’t to say the record is lacking structural substance. Contrarily, I think that Singing the Nocturnes may well be one of the best homages to this classic composer I’ve listened to in the past year, which is no small statement to make by any means.

There’s a simplicity to this album that is at times both intriguing and frustrating in that it never completely accounts for how beautiful and complete a product we’re getting at the end of the day. Sombart wields these keys like a weapon against all evil forces within music, and despite the fact that she’s playing like a concert pianist whose sound is reserved for the ears of only the most elite in society, she manages to give us an LP here that isn’t just fun to listen to; it’s stimulating and full-bodied in a manner that other records just aren’t going to be able to compete with this time of year.

Tension is a pretty big part of the reason why I love this tracklist, and it’s made to emphasize the tonal presence of the piano excellently in the first couple of tracks we find in Singing the Nocturnes. We aren’t listening to an album with a lean and mean production quality; truthfully, the insular feel of the mix is probably why I like the tightness of the piano parts in Op. 62 especially. When Sombart has the spotlight to herself, she isn’t taking it for granted – instead, I think she might be one of the more efficient players to try her hand at the Chopin songbook, at least in the better part of 2021.

The moodiness of this material is balanced by clear respect for the medium that I’ve been having an increasingly hard time finding in the past few years, especially among the classical music community in which it once stood as a supremely unspoken rule. Contrast is everything, and it’s the reason why Sombart sounds like the genius she does in every one of the songs here.

I’ve got a rather discriminating taste in classical music, but if there’s one thing I know about this new album from Elizabeth Sombart, it was made for critics like myself more than anyone else in the market pool. There’s no hating the way this artist reexamines Chopin; in fact, it’s difficult to hear this record without walking away with both a newfound respect for the composer as well as deep affection for the talented woman bringing this work back into the frame this coming January. It’s been quite the wild ride in music over the past couple of years, but if I’m going to be seeing anyone live in concert in the near future, I’d like for it to be an artist as bold and creatively stirring as Elizabeth Sombart is in every performance included in Singing the Nocturnes.