Detroit: An American Autopsy is a not only a fantastically addictive read about how corruption and incompetence is killing the once majestic city of Detroit (ok majestic may be a stretch), but also manages to showcase a fearless, ballsy style of reporting that is almost nearly extinct as well thanks to the new face journalism, partisan to a fault and concerned about little more than click-ability.

LeDuff’s life story alone would have been interesting enough of the sole subject: working class Detroit kid who escaped a dead end life and ends up at the New York Times, only to tell his clueless editors to screw as he goes back to his native city, wife and kid in tow, to take a job at the dying mid-sized city daily the Detroit News. And LeDuff does share quite a bit of his tragic, yet still hopeful family story, from his mother doing everything she can to keep her kids straight, to his sister’s descent into drugs, prostitution and her ultimate demise. But it’s just part of the larger story of the profile of his native city heading into a death spiral. Among the real characters in this deeply compelling book are the corrupt former mayor Kwame Kilpatrick, the equally, yet much more comically, corrupt former city council member Monica Conyers (wife of U.S. Congressman John Conyers), and a group of dedicated firefighters undergoing the Sisyphean task of trying to keep the city from burning to the ground.

LeDuff’s ballsy, take no prisoner style of confrontational reporting made him a few friends (mostly families of murder victims and beat cops and firefighters fed up with the corruption) and a slew of enemies, including some inside his own paper. Detroit: An American Autopsy not only chronicle a town likely taking its last gasps of air, but also exposes a style of reporting that is quickly fading as well. It’s sad on both accounts. 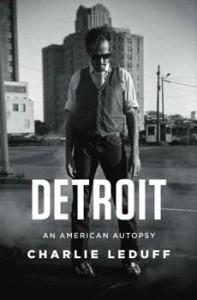