13 Questions is an album that feels absolutely epic in scope. The beginning track, Turn of the Century, ties together a masterful narration with bombastic instrumentation and a lavish production. The Busker utilizes an early country and western style; Cannon’s vocals pull double duty in telling a story and providing additional harmony to the song. True Eyes is an effort that is inspired by “Roland the Headless Thompson Gunner”-era Warren Zevon and “Heroes”-era David Bowie. The track adds to 13 Questions in that the instrumentation and vocals have a fluid role, as both provide additional narration and furtherance of the arrangement. Both The Busker and True Eyes create a precedent for 13 Questions as they soar on music that is very classically oriented despite its contemporary sound.

The title track for 13 Questions sets listeners on a bold new track. The sizzling horns and funky style achieved by this track will tattoo themselves on the hearts and minds of listeners. Of particular note during the run time of 13 Questions (the track) has to be the silky-smooth vocals recorded here. This song is so catchy that it could easily be the title song for a major sixties or seventies show. Cannon’s eclectic style is able to pull disparate influences and styles from the whole of twentieth century music, establishing an unmistakably twenty-first century sound. The vitality of Cannon through 13 Questions’ run time is tremendously heartening and drastically increases the replay value of the disc. Make sure to purchase a copy from Cannon directly, as he has a number of great deals on his online shop. Simply a fantastic album.

Top Tracks: Turn of the Century, Hypnotized and Occupied 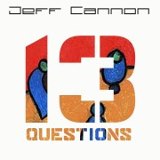