Posted on: April 26, 2013 Posted by: James McQuiston Comments: 0
Gentlemen Hall, one of the most talked about bands to emerge from Boston recently, reveal the official lyric video for their hit single, “Sail Into The Sun” exclusively through MTV Buzzworthy. For this video, the band collaborated with Boston street artist Ian Sanity and video director Ethan Goldhammer to bring the sighing, harmonized, synth-pop single to stop-motion life. “The video is literally a moving painting. There’s a story line as well inside the moving shapes,” Gavin said. “The two triangle protagonists are our two lovers exploding with geometric chemistry.”
Sail Into The Sun” is being used in GLOBAL campaigns for both Samsung and Target. THE MUSIC NINJA raves about the track, “it brings to mind the pleasantries of warmth and the happy-go-lucky freedom of summer living.”
SAMSUNG SMART CAMERA COMMERCIAL
OVER 7 MILLION VIEWS, CHECK IT OUT
TARGET SPRING STYLE COMMERICIALS
It’s Time / Home / Beauty / Neon Apparel / Floral Apparel
Gentlemen Hall are everything we love about Passion Pit, Matt and Kim, and Youngblood Hawke, all rolled into one way-too-much-fun synth-y sextet,” says DIFFUSER FM. Standing strong between the high-handed anthemic choruses of Fun. and the retro synth melodies of MGMT, they are a synth-infused pop band on the rise. BILLBOARD MAGAZINE said it best, “It’s clear that there’s no stopping these gentlemen.”
Beginning as a group of friends hanging in college dorms, the six guys formed the band in 2008. After winning numerous accolades such as MTV’s Best Breakout Band in 2009 and Boston’s Best Act in 2011, the band was nominated and won Billboard’s Battle of the Bands and made history being the first independent band to perform on the Billboard Music Awards in 2011. In September 2011, they released their debut EP “When We All Disappear” (Download, listen here) to critical acclaim and toured nationally throughout 2012.  They are currently finishing their full-length album, which is due out in late 2013. 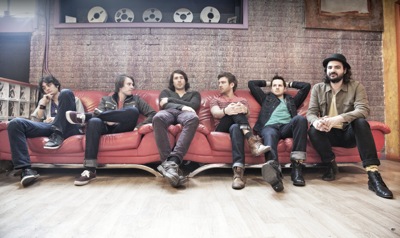