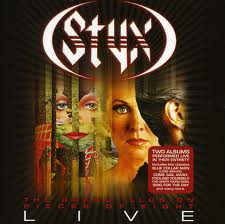 Styx was captured late in 2010 in Memphis at the Orpheum Theater. During this performance, Styx played the entirety of two of their most well-known albums, Pieces of Eight and The Grand Illusion. The audio quality of these CDs are excellent, with the crowd response being the only tell that this was a live performance. The current Styx (including new lead singer Lawrence Gowan) are just as much of an experience as they were during the pinnacle of their careers. The concert begins with The Grand Illusion, establishing the overall tone and feel for the performances that are to follow. What becomes immediately evident with subsequent tracks (Fooling Yourself, Superstars) is that the band has put in the work to render these album tracks as beautifully as singles like the aforementioned The Grand Illusion and Come Sail Away.

Come Sail Away contains all of the masterful progressions and tempo changes that made the track so memorable, and provides ample momentum to allow listeners to finish up The Grand Illusion. The rising action of Pieces of Eight represents a wholly different experience than The Grand Illusion. In this set, Styx begins spectacularly and increases their game for Blue Collar Man and Pieces of Eight. Finishing up the album experience with Aku-Aku, Styx show that they can hang with bands that have been around for half as long.

The The Grand Illusion/Pieces Of Eight performance also has been released in a Blu-Ray and DVD / 2 CD package. The release is available at brick and mortar music stores along with numerous online retailers.