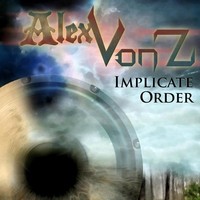 The Implicate Order EP has 4 tracks which unite to provide a solid introduction to Alex Von Z.  Drawn is the initial offering, and it immediately provides listeners with a sense of camaraderie. The production allows listeners to be transported into the closest setting with Alex Von Z, while the Implicate Order CD provides two different ways to enjoy the track. What It Should Be is a complex track that yields considerable replay value; Alex Von Z’s vocals here pull double duty as a narrative and an instrumental element. The bass, guitars, and drums are all given their own time to shine, creating a much more fulfilling effort than is typically present on radio rotation. The track has something for everyone, as Alex is able to touch on sixties rock, alternative music, and even current pop-rock genres with the greatest of ease. The track may only take up a few minutes, but the shifting set of styles at play keep things interesting from beginning to end.

Chocolate Covered Karma is a harder-rocking track, and will immediately draw comparisons to Bon Jovi and early Guns ‘N Roses. The production that captures this track allows all the disparate elements to shine and to create a cohesive and alluring track. Each subsequent effort on Implicate Order provides a little additional information about Alex Von Z, and the four tracks here will get listeners salivating for the upcoming full-length album.

The lyrical content of tracks on Implicate Order is tremendously effecting; those individuals that are able to actually sit down and focus on what Alex Von Z has to say will be swept away by the depth that is present on cuts like Drawn or What It Should Be. Visit his website above or check out the Kickstarter for the album – https://www.kickstarter.com/projects/2113359275/alex-von-zs-implicate-order-album .

Top Tracks: What It Should Be, Chocolate Covered Karma