Feather and Dust is the new release from Beverly Girl, an act that looks back into the nineties to craft an inimitable style that works in 2014. On this album, the band creates 8 tracks that are fun, intricate, and will keep listeners tuning in for more. 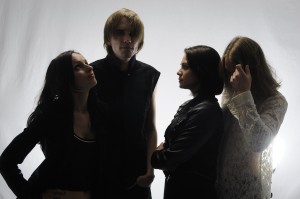 In The Street is a track that unites electronic, techno, and new wave into a shuffling and catchy effort; the band is immediately able to capture listeners’ attention with this eclectic array of styles and influences. The female vocals provide an organic side to Beverly Girl’s much more electronic instrumentation. This dichotomy is continued with Go With What You Got, a cut that deftly balances these distinct elements and showcases the sheer depth and breadth of the band’s toolbox.

Move On is a frenetic track that immediately kicks the momentum into high gear. The smoky vocals lie nicely over the track, while the overall composition takes equal influence from Yaz, Debbie Gibson, and Bananarama. Wind is the final cut from Feather and Dust, providing a smart end to a strong album. Beverly Girl is able to link this composition to the rest of the songs on Feather and Dust, but provides fans with some idea about what tack Beverly Girl will ultimately take on future recordings.

The lead single from Feather and Dust can be found at the band’s Soundcloud (https://soundcloud.com/beverly-girl ), while Beverly Girl’s Facebook has information about their live dates, videos, and will have information regarding where you can purchase the album after its release date on May 22nd.

Top Tracks: In The Street, Go With What You Got