Musicians are notoriously a sensitive group. Even more so when it comes to poking fun at their own legacy. So it was particularly admirable of longtime cult rocker Graham Parker to play himself in 2012’s This Is 40, a film where Paul Rudd’s character is losing money because his record label banked on the failed notion that there was still an audience for Parker and his longtime band The Rumors. 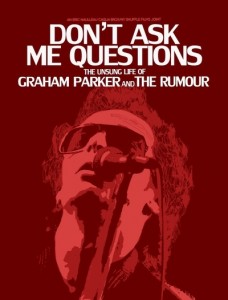 While it’s true that Parker and his band aren’t exactly pulling in Springsteen-sized numbers when they tour nowadays, there is still a devoted, hardcore fan based across the globe that is always waiting for Parker’s next release (including Springsteen himself). Don’t Ask Me Questions covers the British musician’s beginnings, stuck somewhere between Punk, New Wave and straight up Rock, through his 35 years-and-counting career as a singer/guitarist who refuses to compromise his music.

The doc also covers the reunion of Parker with his original group The Rumors and the writing of the band’s 2012 album Three Chords Good. The band members have all found a way to mix their should-have-been rock star lives with their current day jobs (including a librarian and a guitar teacher). A slew of fellow musicians (like Springsteen, Black Francis, Nick Lowe and Joe Jackson) and Hollywood fans (Judd Apatow and Rudd), weigh in on the influence of Parker and his band.

Much like last year’s Big Star documentary, Don’t Ask Me is both highly entertaining and frustrating when you realize they still aren’t all household names at this point.