Smuttynose released Bouncy House last year in a Short Batch series, and has shifted production of this session IPA / American pale ale over to a more consistent format. The beer pours with a golden brown. There is a small amount of off-white head that rapidly dissipates quickly. The effervescence of the beer creates a lighter profile on one’s palette, while hints of hop and juniper come forth with each sip.

The beer maintains a solid backbone at all points, with a consistent flavor profile acting as a fixed point no matter where one may be at in a six pack. Bouncy House works equally well in the hottest days of summer as well as the incipient days of autumn that we have been experiencing in Ohio. The beer is a great introduction into the IPA style, but it also has enough chops to keep well-versed fans of IPAs interested. The beer would pair wonderfully with fish, chicken, or sushi for sit-down dinners while being robust enough to work as a camp out beer.

Make sure to visit the Smuttynose website for more information about the brewery, the company’s year-round (and seasonal) efforts, and a calendar of Smuttynose-themed events. 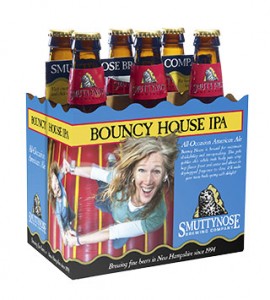