After The Lights Failed has a tremendously emotive and orchestra sound that creates a larger than life feeling for the track, with rapid shifts in tempo showcasing a Protean nature to this San Jose-based act.Instant Gratification has Curious Quail kick things into high gear, with the band taking up the standard of fun. And Mumford & Son. 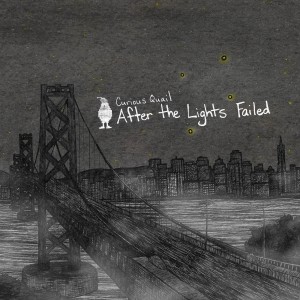 The instrumentation during Instant Gratification is made more intense through a clear production. Each of the constituent elements of Curious Quail – both sets of vocals, drums, guitar, and bass – are able to contribute to the overall feeling of the track as well as shine on their own.  After The Lights Failed takes a nice turn with Moon + Stars; hints of The Appleseed Cast and The Anniversary can be discerned in this slower, much more introspective effort. The band’s spontaneous nature is showcased during Moon + Stars, as the band gradually speeds things up until listeners are provided with a tumultuous and dense effort that will continue to yield new twists and turns for a number of listens. Curious Quail’s ability to continually adopt new styles and approaches makes late-album efforts like Giraffes all the more impressive. The contemporary sound of Curious Quail is expanded through inclusion of alternative influences (Pearl Jam, R.E.M.).

After The Lights Failed is available on Curious Quail’s Bandcamp, while further information about the band, their live dates, and other news can be located at their social media accounts (Facebook and Twitter). Curious Quail is able to create an album that impresses from beginning to end, creating their own unique style while hanging their hat on the emotive and indie rock genres.

Top Tracks: After The Lights Failed, Apart We Are Together