Elvis Presley – That’s The Way It Is: Deluxe Edition

Legacy Records continues its massive project cleaning out every company vault and looking under every old rug for goodies and extras to tack onto their Elvis Presley re-releases. The latest, the massive eight CD, two DVD collection for Presley’s 1970 concert and documentary, That’s the Way It Is, is one of their best offerings date.  But be warned, this is not for the casual Elvis fan. It should be noted that Legacy has also put out a much more manageable two CD set, for those looking to skim the surface.

The original That’s the Way It Is album was billed as a soundtrack to the documentary of the same name, which covered The King’s return to Vegas, but only a handful of songs here were actually recorded at those iconic Vegas shows. The rest were taken from studio recording made months ahead of the concerts, Regardless, it’s still Presley sounding phenomenally strong, in all his tacky rhinestone-covered jumpsuit and caped era glory. Songs like “You Don’t Have to Say You Love Me,” “Patch it Up,” “I’ve Lost You” and possibly the best cover yet of Simon and Garfunkel’s “Bridge Over Troubled Water” remind you why Elvis has inspired everyone from punk rockers to kids in country bands.

Along with singles and outtakes, this mammoth deluxe set captures six complete “Dinner” and “Midnight” shows recorded in Vegas, as well as a separate disc crammed with 20 songs from rehearsals (this last disc is particularly fun thanks to the goofy camaraderie; Presley and his band clearly enjoyed the prep leading up to these shows).

The DVDs feature the original documentary and an extended version that was released in 2000. The package is completed with an 80-page book of photos and liner notes. This latest Legacy offering will be a tough one to top. 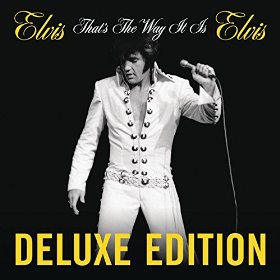