Midnight are Cleveland’s hooded kings of lucifer infused metal. They made a stop in Austin on August 31st to play 6th Street’s crowded Dirty Dog Bar on a hot, muggy night. The set was opened up with “Satanic Royalty”, the title track off of 2011’s album of the same name. The crowd exploded into a circular mosh pit as the first chord was struck. 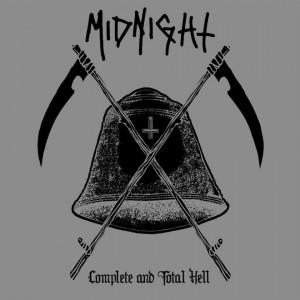 They played a whirlwind set with a punk rock fury that included such sweet, sweet jams as “Necromania”, “Lust, Filth, and Sleaze” and the older yet equally awesome song, “Endless Slut.” This is a band of seasoned veterans. Past members of Midnight have played in such heralded bands as Cider and Annihilation Time but the brainchild of this project is Athenar aka Jamie Walter’s, previously of Boulder. There is a reason for Midnight’s rise in popularity. These are authentic yet ridiculous songs that are carrying on the proud tradition of aggressive rock n roll music.  Make sure to catch Midnight each and every time you can.
Please follow and like us: