Freedom’s Alluring Call is a trance-infused instrumental composition that deftly links together natural and artificial elements into something that is brooding, expressive, and carries a narrative richer than any vocal effort. 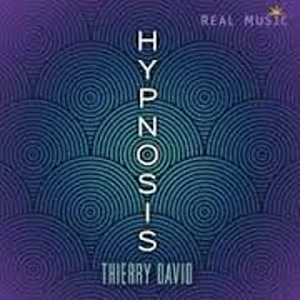 Labyrinth of the Unconscious is a track that uses just as much empty space as instrumental arrangements to establish the effort’s overall sound. This chiaroscuro between dark and light, fantastic and mundane, is something that David threads through the entirety of Hypnosis. Into the Shimmering Mantra furthers this theme, with booming elements that are offset by sleigh bells and sandy percussive elements. The treble, bass, and space between keeps the momentum high while allowing David ample time to craft an effort that is wholly unique from the other compositions on the disc.

Hypnosis ends with Nothing to Forgive, the album’s shortest effort. At two and a half minutes one may presume that David would not have enough space to establish a fulfilling and compelling track – the efficiency of time that David here means that one will have to unravel all the different twists and turns presented here. As the album’s ultimate track, Nothing to Forgive is simply a must-listen, an emphatic exclamation point to a superb album. Beyond Attraction is the second to last effort on David’s latest, and it inserts a funky, tribal twist to the album – there is a sense that David tries his hardest on each effort no matter where on the album a listener might be. In doing so, he has a hit on his hands.

Make sure to purchase Hypnosis when it is released on October 27th; one can locate the title at well-stocked music stores and at online retailers (e.g. Amazon)

Top Tracks: Labyrinth of the Unconscious, Into the Shimmering Mantra