There have been a lot of different efforts on the market that attempt to marry a darker spirit with an apple flavor. The tradition goes back for a considerable time to the days of the bootleggers which created efforts like Applejack. Crown Royal has created their own foray into the apple flavored tradition with their Regal Apple. The Spirit is very dark and is something that will immediately appease fans of Crown Royal’s typical product offerings. 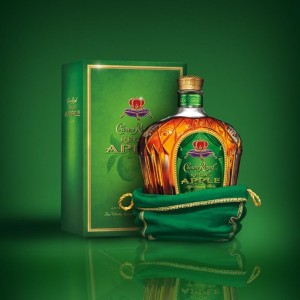 There is a certain zip, a bite to this whisky that wall immediately imbue a sense of warmth upon anyone that suits or steps this spirit. Far from the actual burn that exists there is a more delicate apple profile that is present with each subsequent sip that one has of the Crown Royal Regal Apple. The spirit is like somebody has boozed up a candy apple and put it into a drink, while the raw passion of the blend of whiskies that are used make sure that the bottle will be drained soon after it is initially cracked.

The Crown Royal Regal Apple works well as a sipping or a shooting spirit, but I really like how the spirit shines in revamped versions of typical whisky-containing mixed drinks. A whiskey sour has a considerable depth when one uses the Regal Apple, while a Crown & Coke makes for a strong but ultimately satisfying mixed effort. Make sure to purchase a bottle of Regal Apple from your local spirits shop before the supplies dwindle; a 750ml bottle of the stuff will typically run about $25 to $30.