One Long Skid Volume 2 is the follow-up to Clark’s 2011 initial volume of the One Long Skid series, and it provides listeners with some of the most eclectic and well thought-out rock music that they have heard. The guitar lick that begins Mr. Fix-It Man is emotive, alluring, and tells a tremendous story even before the rough and road-weary vocals of Clark begin. These vocals straddle the line between Bob Dylan and Ian Anderson, while the production of this initial track is at a level that current generations of music fans can appreciate. 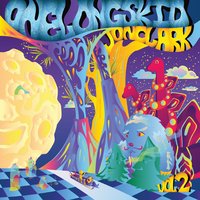 Cloud and a Deed is a more trippy and expansive effort that showcases the technical skill of each musical instrument on the composition; hints of late Beach Boys, America, or Wings can be heard here. Don’t Tell Me Now is a folk-rock track in the vein of Credence Clearwater Revival, provided with an additional layer of complexity through the inclusion of a very soulful, choir-like backing that becomes active at various points during the cut. Many Friends is the final track on Volume 2 of One Long Skid, and it hammers home the comparison to the mid-sixties output of Bob Dylan; an immediate harmonica line immediately draw attention to the story that Clark tells here. The album ends emphatically with a number of different styles and approaches broached; this is one filling effort.

Make sure to visit Clark’s website for further information about his discography, additional press coverage, and an in depth biography that will provide considerable context to this stellar performer. While at this domain, one can purchase both volumes of One Long Skid (single volumes are $11, while both volumes are $16).