Hello. Your latest EP is Silence is Golden. What significance does the title hold for you?

For the majority of my life, I’ve been considered the “quiet one”. I only like to speak if I truly feel I have something to say and contribute to the conversation. For whatever reason, people sometimes hold that against me. The title of the album comes from the idea that my greatest achievements have occurred in my silence, not when I’m speaking. It’s the superior means in which I communicate with myself. 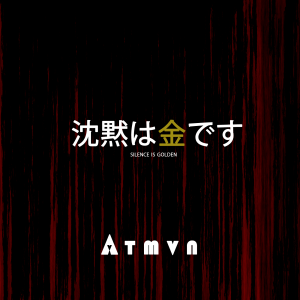 I have a few creative processes, but I’ll explain one that makes the most sense. The majority of my songs are inceptions, midpoints, or conclusions of an event, temporary moments where I’m thrown into deep thought about an experience I’ve had. I’d love to say that I can control when this happens, but I’m not quite there yet. I match the soundscape to the moment, so if it’s an argument, the track and lyrics will have an aggressive nature. I’ll clearly be pushing a specific point. That’s the initial thought. Completing the song is really about maintaining that connection with the event while I write and create the soundscape. Being able to effectively communicate to myself what I’m trying to accomplish helps as well.

Which artists are the greatest influences for you as a musician?

Frederic Chopin, J Dilla, and Andre 3000 are the main artists/musicians that have genuinely influenced me and my sound. Their music puts me in somewhat a trance, no matter how many times I listen to it. There’s a lot of beauty in the works they’ve created.

The process used depends on the album. If it’s a story, there is an embedded sequence in the tracklist. I typically have a sense of what types of songs I’m going to make before I make them. I always attribute the track order to the emotions I’m portraying along the album. Ultimately, the tracks that make the cut are successful and complete song attempts. I delete songs that don’t meet the quality or depth I expect of myself, even if it fits the sequence or placement in the album. If the song doesn’t have a purpose, it isn’t accepted. If I’m indecisive, I like to look for a 2nd or 3rd opinion, but it will always come down to whether I am satisfied with the attempt and purpose of the track.

Where does Silence is Golden fit into the rest of the Atman discography?

Silence is Golden is officially my 5th album, and it is also the beginning of a five album series I’ll be releasing over the next two years, called The Silent Treatment. It represents one of my phases of silence that I was referring to earlier. It’s actually a break from my previous albums, and much more personal. Each album is themed around one specific event in my life. Some of them are really joyous, and others are quite horrifying. My goal is to get more comfortable sharing my personal growth as an individual, and all of the challenges that come along the journey.

Twitter, by a landslide. I enjoy engaging directly with people, and Twitter best facilitates this type of engagement. I consider fans as peers, and I enjoy getting their take on my music and the experiences they build from it. I’ve been in front of a keyboard for almost two decades now, and words tend to flow smoothly when I am in front of one. Face to face meeting is still important, social media could never replace it. However, it is much easier and more time-friendly to reach out to people via social media, especially when I plan to have a real conversation, as opposed to sending out one-liners.

Which tracks are your favorite on Silence is Golden, and what makes them so?

I love them all equally, but if I was forced to choose favorites, Ceilings, Wake Up, and Killer are my favorite songs. Ceilings and Wake Up are favorites because they’re some of my most honest feelings about music, the daily trials life throws at you, and the current state of society. Killer is a favorite because I am always a rapper first. I pride myself in my fluidity and grace with a pen.

iTunes for snippets, Spotify for whole songs. Links for both are included front-and-center on my website www.iamatman.com. I also have samples of singles on SoundCloud. My artist website is the perfect one-stop-shop for all things Atman.

What is the next step for you?

The next step is to start performing frequently and everywhere. My team and I feel I have the discography to seriously take the world by storm, so we’re working on putting the music in front of the right faces and packaging it appropriately. This means the right audience on all sides of the spectrum, including industry professionals. The goal is to get major label marketing exposure for the Atman and Spiritz Music Group Brands.

I want to thank NeuFutur and James for this opportunity. This interview is easily one of my favorites. The questions were well thought out and thorough. I want to thank you all for reading! If you like what you hear, check out the full scope of my music at www.iamatman.com.

Thank you so much for your time. Samples from Silence is Golden are available on Atman’s Soundcloud (http://www.iamatman.com/atman-silence-golden/ ).