Lost and Found is a raucous track that sails on a fuzzy sea of guitars and intensively emotive vocals that are equal amounts Dexter Holland, Justin Sane, and Paul Westerberg. The dynamic between the guitars and drums creates something that is absurdly fast while possessing just enough order to properly wallop anyone that is listening in. Weekend Syndrome begins with an instrumental introduction that opens up to a blend of pre-Dookie Green Day and Jet. The styles of music that The Naddiks choose for the songs on the 21CB EP work well together and speak to a considerable swath of fans; there is as much Detroit rock as there is Crimpshrine-era California. 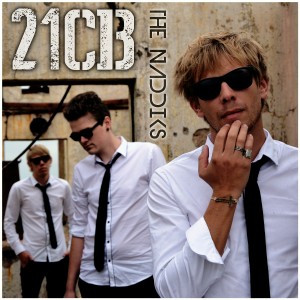 The Naddiks’  21CB takes a wholly different tack with Human Condition. The emotive, new romanticism-y guitar track and impassioned vocals showcases that the band can take up different standards at the drop of a hat. The band is able to make this track into something that is memorable. Into Your Arms is able to build off of the work of the late-eighties DC/Buffalo emotive scenes while establishing a contemporary sound.

Twenty First Century concludes the 21CB, and the cut showcases The Naddiks’ ability to create a stomaching, catchy rock tune. The hint of punk accorded the track by the vocals provides an additional layer to the compositions; by adding all the pieces of the band in this composition, The Naddiks are able to give listeners an emphatic ending to the recording. While there are 6 tracks on the 21CB EP, I believe that The Naddiks have much to show fans. Make sure to visit their domain and social networking to hear samples from the EP, check out the latest news, and hear the newest efforts from the band.

Top Tracks: Lost and Found, Into Your Arms