Pretend You’re in a War: The Who & The Sixties by Mark Blade 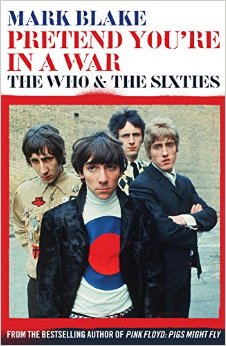 There is no shortage of books out there about The Who. But London-based music journalist Mark Blade has proven there was room for at least one more.

Much like his book on Pink Floyd (Pigs Might Fly), the author manages to cover some of the band’s better known stories, while treading new ground to make for a compelling read. Pretend You’re in a War covers the band’s beginnings, with various lesser known members and a different name, through arguable their most creative period in the mid-to- late-1960s up to their classic, caustic set at Woodstock (some much needed angst and destruction to wake up the hippies) and the creation of Tommy, still the greatest rock opera ever pulled off.

The book does drag a bit in the beginning as Blade goes down a rabbit hole to explain the childhoods of every member as well their managers, going back one generation too many for the sake of being thorough, but once the writer gets to the band’s core lineup – Peter Townsend, Roger Daltrey, Keith Moon and John Entwistle – the book is hard to put down. Among the interesting anecdotes gleaned from past interviews with Townsend, Daltrey, Entwistle and others in their camp, is the story of Townsend, after seeing the bills add up for his trademark guitar thrashing at the end of each show, learning how to hold the guitar in a specific way and strike the stage at a certain angle that the instrument could be repaired backstage with wood glue and ready to use again the next night. The book also goes into fascinating detail about the band’s performance at Woodstock, including the near Urban Legend that the band would not take the stage until their manager had money in hand (Blade goes into humorous detail of how the local bank manager in rural new York had to be located at his home and come into the bank on a Saturday night to override the lock on the vault to retrieve the band’s gig money).

Because of the author’s decision to focus on one decade of the band’s existence, there are a number of key landmarks in the band’s history that are covered here in just a few sentences and mainly in the afterword (like the deaths of both Moon and Entwistle, the Ohio concert trampling in 1979 and the band struggling for relevancy in the 1990s). But by focusing so meticulously on the ‘60s, the writer has turned in one of the most definitive books on the band to date.