DownTown Mystic, Turn Around and Go

DownTown Mystic has continued their string of hard-hitting singles with their latest single, Turn Around and Go. This track links together the masterful work of Robert Allen with a band of musicians that include PJ Farley of Ra/Trixter fame on bass, Tommy Mastro from The Discontent, and Bruce Engler filling out the vocal side of things. The production of Turn Around and Go allows the constituent elements of the band to shine together and as separate performers. The track looks to continue the same strong charting of DownTown Mystic’s previous music – the band’s eponymous release spent 40 weeks on the Americana Radio Airplay Charts, while DTM has rocketed up AirPlay Direct a number of times over the course of the last few years. 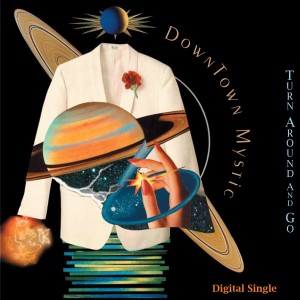 The most fascinating facet of “Turn Around and Go” has to be the differences that it possesses from the rest of the DownTown Mystic discography; while conforming to the same rock genre, one can hear an expansive set of influences threaded through each minute of the track. Taken together, these influences and stylistic decisions will take fans on a journey from the beginning to the end of the cut. The band seems to be working on all cylinders as Robert describes “Tommy is one of the best rock drummers I’ve ever seen and PJ is just as impressive on bass. Both are from different bands and styles, but very current.” The “Turn Around and Go” single concludes with two tracks, Believe in Nothing and an unreleased live track, Backdoor.” Whatever effort from the “Turn Around and Go” single one plays, listeners will be pleased to hear callbacks to seventies rock, eighties pop-rock, and a variety of genres including funk, soul, and even punk at the composition’s periphery.

Make it a point to visit the DownTown Mystic website at http://downtownmystic.net/ ; the band’s ReverbNation ( http://www.reverbnation.com/downtownmystic ) contains “Turn Around and Go” and a number of tracks from the ever-increasing DTM discography. For the latest in news about Robert and the rest of the band, the Facebook is updated on a regular basic. A lyric video for the latest Sha-La Music single is able to be found at https://www.youtube.com/watch?v=0fkcr18Oaj8 . Here’s to hoping that the band will continue to forge their bold path through the remainder of 2015. Let us know what you think of “Turn Around and Go” or DownTown Mystic generally.