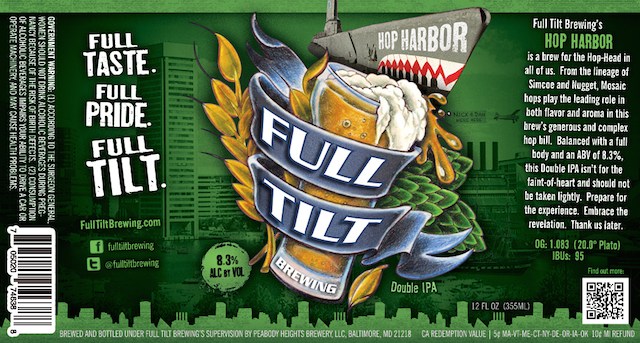 Full Tilt has just released a new Imperial IPA, Hop Harbor. The beer is able to succeed because of the bold flavor profile that it possesses. While the hop flavors come into focus at the end of each sip, there is a considerable smoothness that runs through the entirety of the beer; Full Tilt’s effort here is something that will appease those that are fans of IPAs and would like to go into higher-octane iterations of the india pale ale style. Hop Harbor pours with a golden brown coloration and a decent amount of head that is definitely tenacious; it laces its way down the bottle. As Hop Harbor continues to warm, the overall backbone of the beer stays constant. This means that even as one continues to sip the beer there is still a hop wallop and a slight amount of grain that represents the constant thread in the beer. There is a good amount of citrus fruit that is present at points to provide enough in the way of variety to have one easily begin and finish the effort – Hop Harbor is one of the shining examples of an imperial IPA that is able to be varied and intense without veering too far in either direction. As such, Hop Harbor is a great addition to the Full Tilt line; the brewery has continually been able to knock it out of the park each time that they release a new beer to their core line.

For additional information about Full Tilt and their year-round and seasonal offerings, make it a point to visit their domain – their beer locator will provide potential imbibers with a set of places where their offerings are available. The latest information about the brewery and various tap takeovers can be located on their Facebook.