As is the case with cow’s milk, mother’s milk has a shelf life at refrigerator temperatures. With the volume of the milk produced by a mother that is lactating in excess of what a child can drink, preservation is essential. To decrease the amount of stress that goes into the freezing and reconstituting process, Milkies Milk Trays (a Fairhaven Health product) have been introduced. These trays allow breast milk to be frozen into one-ounce increments in a bar/column shape. This unique shape makes it easy to slide into a bottle without having to chip away or partially melt breast milk that has been frozen in typical ice cube molds. To remove the possibility of crumbs or freezer burn with frozen breast milk, Milkies milk trays come with a second piece of flat plastic that attaches to the top. A grip at the bottom of the tray makes separation of the two parts easy, even when the plastic has been in the freezer for an extended amount of time. The trays are durable while still having enough give to allow the frozen milk to easily be removed. 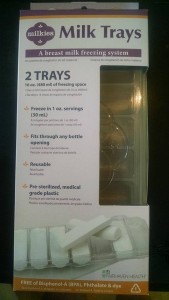 The Milkies milk trays or wholly free of dyes, phthalate, and BPA (Bisphenol-A), ensuring that the child is receiving only the nutrients from the milk. The Milkies Milk Trays are available directly from the company for $21.95 as well as from other online retailers. Each set of Milkies milk trays comes with 2 trays, which will reliably freeze 16 ounces of milk after five hours in the ice box. The trays are pre-sterilized and can be washed with warm and soapy water. After one replaces their Milkies or moves past the need for breast milk, the milk trays can be recycled. For more information about the full Milkies line, bookmark Mymilkies.com .