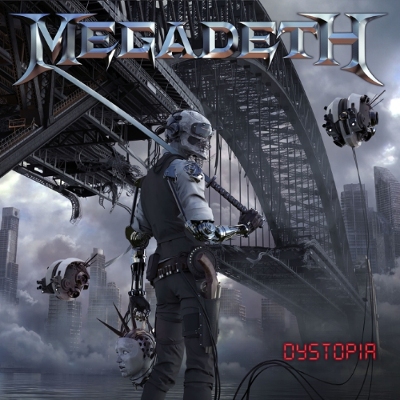 MEGADETH will kick off the new year with the release of their 15(th)studio album Dystopia on Universal Music Enterprises January 22, 2016. With musical architect and band visionary Dave Mustaine at the helm, Dystopia was recorded in Nashville, TN, and mixed by Josh Wilbur (Lamb of God, Gojira, Avenged Sevenfold).

The rest of the MEGADETH lineup is comprised of David “Junior” Ellefson on bass, new member Kiko Loureiro (formerly of Angra) on guitar, and drummer Chris Adler, who took time away from Lamb of God to record Dystopia. The result marks a true return to form, adding new blood and injecting a new burst of creative energy into the new album.

Featuring 11 brand new tracks, Dystopia will be released on both CD and LP, as well as digitally through all online partners. “Fatal Illusion” is the first track released from the album, listen here.