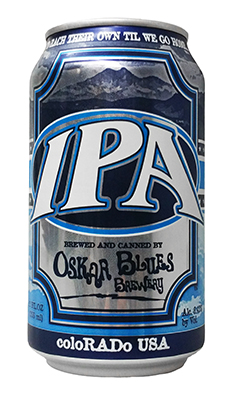 Oskar Blues has placed an eponymous IPA into their year-round rotation. The beer pours with a dark yellow /light orange coloration and a good amount of foamy white head. The initial nose of the IPA ties together citrus fruits, grain, and a small bit of malt. The raspberries, pineapple, and a bit of an alcohol burn makes this IPA into something that is just as exciting at the conclusion as it was on its first sip. 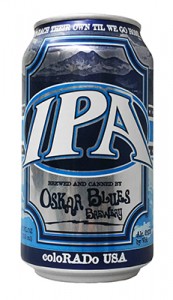 The presence of a good malt backbone ensures that the beer does not move into a more sugary direction. The bitterness of the hops shine through as the beer begins to approach room temperature. Hints of pine and flowers can be discerned at points, highlighting the lemon and orange sides to the beer. Oskar Blues’ IPA is well-balanced and would be paired perfectly with fish, chicken, sharper cheeses, or salty snacks. The wheat and grain that poke through at points makes this effort into more of a symphony than a three-chord single; the bit of alcoholic bite that is present ties everything together into a nice bow.

The Oskar Blues IPA is available in cans and can be picked up at any local beer stores that stock the brewery’s efforts.  We have reviewed a number of Oskar Blues’ beers in the past; their Pinner IPA is a high-water mark for session IPAs, while Dale’s Pale Ale is refreshing and similarly dense in flavor. Visit the Oskar Blues’ website for a full listing of the brewery’s year round and seasonal beers, while OB’s Facebook and Twitter will keep individuals up to date about new brews, events, and the latest from the company.