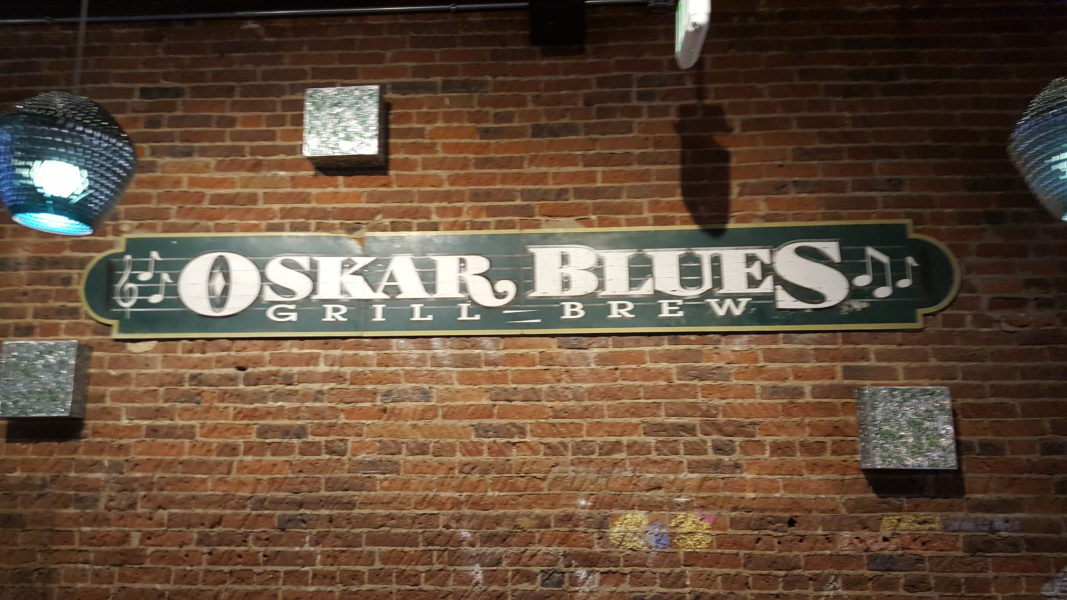 We were able to stop in to their new location during our trip to the Denver area. As soon as we walked in the door, we marveled at the decorations and polish of the bar, tables, and overall ambiance of the location. Despite being downtown during the early evening, there was cheap parking literally next door to the restaurant. The Oskar Blues Grill & Brew remained busy throughout our visit, but there were ample enough staff and space to keep a light and air feeling throughout.

The Bacon Candy ($5) was formidable. The additional layer of sugar that enrobes each of the bacon makes for a sweet, salty, and savory beginning to a meal. The Deep Southern Fried Pickles are breaded, giving people a nice little jolt as they chomp into each bite. The assertive flavors of these pickles would pair nicely with an India Pale Ale or other fruit-forward offering.

The sides offered at the restaurant are pretty snazzy takes on new American fare, with crab & corn fritters, cheddar grits, a baked macaroni & cheese and asparagus offered as side plates ($4 ea). We chose two entrees – a “There’s A Hippie In My House”, a sandwich which adds chicken and mozzarella to arugula, tomato, avocado, and red peppers. The sandwich was finished up with hummus and pesto, we were quite pleased at the bevy of flavors that were present. The additional texture given it by the arugula and chicken ensured that one $16 sandwich was more than enough for two servings. Each of the burgers that OB offers here begin with a 1/2 pound patty. Whether one has a Trustafarian Burger ($14) which has arugula, goat cheese, bacon, and honey or the Silo Burger ($15, comes with a goodly amount of BBQ pork with Dale’s original hot sauce, pepperjack and Bacon), one can be sure they have a fulfilling meal. The burger was cooked to a perfect medium while the cold elements were crisp and provided a nice contrast to the bold beef flavors.

Of course, it would not be a visit to Oskar Blues if there was not some beering going on. We tried a trio of their main-line and seasonal brews, including the 2018 Fugli, G’Night and Pinner.

Fugli (5.8%) is a different beast than the initial version, linking considerable citrus and fruit elements contributed by the Yuzu and Ugli Fruit with a solid hop snap and ample wheat element. After the bold flavors of the G’Night, the much brighter side to Fugli was a palette cleanser.

For those looking for a big beer before a game or during one of the , the restaurant offers 4-ounce pours of their 12.9% bourbon barrel-aged Ten Fidy which was perhaps the best BBA variant of any stout we’d tasted last year.

If you find yourself in the Denver area and want good southern-inspired food and a world class slate of suds, make the OB Grill + Brew your first stop.