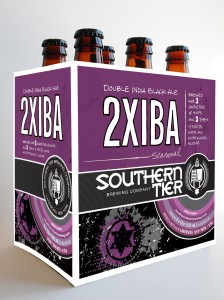 2XIBA is the latest seasonal from Lakewood, NY’s Southern Tier Brewing Company. This india style black ale pours with a tremendously dark chocolate to midnight coloration and a fair amount of tannish head that creeps its way down a glass as one continues their journey. On the initial sip, imbibers will experience a blend of piney and fruity hops that are quickly followed up by a strong toasty, biscuity side from the malt inclusion. 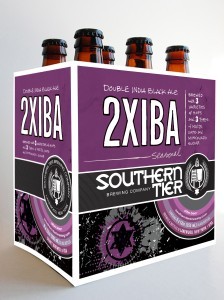 There is a decent thread of sweetness (vanilla, molasses) that weaves its way through each beer due to the brewery’s inclusion of Muscovado sugar, while additional flavors can be discerned at points. As Southern Tier’s 2XIBA continues to warm, the hop-forward aspect of the effort fades into the background as tobacco and dark fruits become more prevalent.

A strength of the 2XIBA comes in the beer’s substantive mouthfeel. The thicker than normal body of the beer allows the disparate tastes to unite into a cohesive experience. Tastes of cocoa, coffee, and caramel peek through at points, something that increases the depth of the 2XIBA. This brew is decently carbonated, imbuing a lightness to the 2XIBA that make individuals as eager to drink the last few swallows as they were when they initially opened the bottle. Part bitter, part sweet, Southern Tier’s 2XIBA will appease anyone looking for a larger than life brew; as an evolutionary step forward from the brewery’s recently-retired Iniquity (Imperial Black Ale), it is a must-buy. 2XIBA is available in 6 packs.