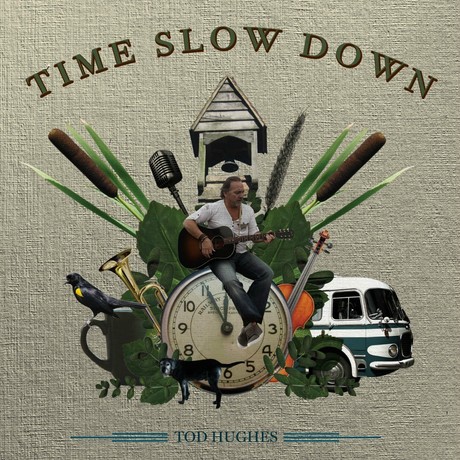 The titular effort on Time Slow Down has a hopeful demeanor, drawing heavily upon the folk style of the middle part of the twentieth century. Smart instrumentation keeps on time as Hughes is able to weave a rich narrative. One of a Kind has an intense, sizzling guitar line that works masterfully with the splashy percussion and Neil Young-infused vocals.

Nothing Too Obscure slows things down; Tod immediately draws listeners in with a close and cozy vocal-heavy opening. A walking bass line represents the perfect accompaniment to these vocals. As the effort continues to spin, hints of Creedence Clearwater Revival and James Taylor can be discerned. Drinking Coffee In a Hipster Place includes a horn that provides further variety to the composition. This means that fans will be treated to hints of blues, jazz, and even psychedelic music before the track concludes.

Coming Home To You keeps the energy of Time Slow Down high as fans move into the second half of the album. Particularly intricate in the dynamic between the guitars and drums, the bit of 1970s/1980s-rock (The Police, Dire Straits, The Clash) included here will have listeners on the edges of their seats as they move into Real You And Me. Re-centering the effort into the fertile roots background that began the album, Hughes is able to make an effort here that remains with one long after the CD has ceased to play.

Darkness That Cries, the final track on Time Slow Down, utilizes a slower tempo and an accompanying set of vocals for great effect. This concluding effort puts an emphatic end onto a solid release.

Top Tracks: Drinking Coffee In a Hipster Place, Coming Home To You