Bucky Hayes and the Commonwealth – 100 Miles to Macon 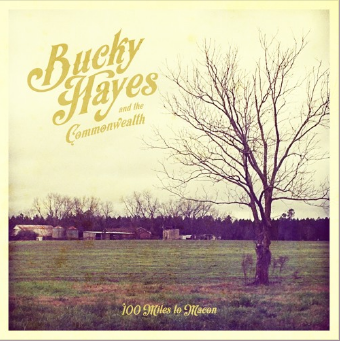 Bucky Hayes and the Commonwealth begin their 100 Miles to Macon with I’ll Leave The Light On, a high-energy Southern-infused rock track. The arrangement shines due to vibrant vocals, sizzling guitar lines, and splashy drums that keep time impeccably. The slight grit of Hayes’ voice adds further complexity to an already deep introductory effort. Go Brother Go begins with a slower tempo, linking together Paul Simon, the Drive-By Truckers and sprinkles just a hint of The Wallflowers. The softer sound of Go Brother Go leads nicely into Round Round Round. The raw passion and power of Hayes’ vocals during the opening minute of Round Round Round lead into a bouncy Americana that makes me think of classic westerns and steamboats. A lively piano line matches well with a guitar solo to unite the two parts of the song.

The Times You Chose To Be In My Arms pulls back from the complex instrumentation of the earlier section of 100 Miles to Macon. A more deliberate and plodding approach puts emphasis on the interaction between Hayes’ vocals and the constituent elements of the band. One More Song Before The Morning is a powerful rock track that hurtles towards its inevitable end. The guitars, drums, and vocals create something that bridges the gap between power-pop, country, blues, and southern rock; the melodies crafted here will be bouncing around listeners’ heads long after the disc ceases. We Gonna Get Stronger Somehow calls back to the days of 38 Special and Meatloaf all while sounding separate from the rest of the album. The eclecticism of this concluding track is a further testament to the talent of Hayes; 100 Miles to Macon comes out in September.

Top Tracks: I’ll Leave The Light On, The Times You Chose To Be In My Arms