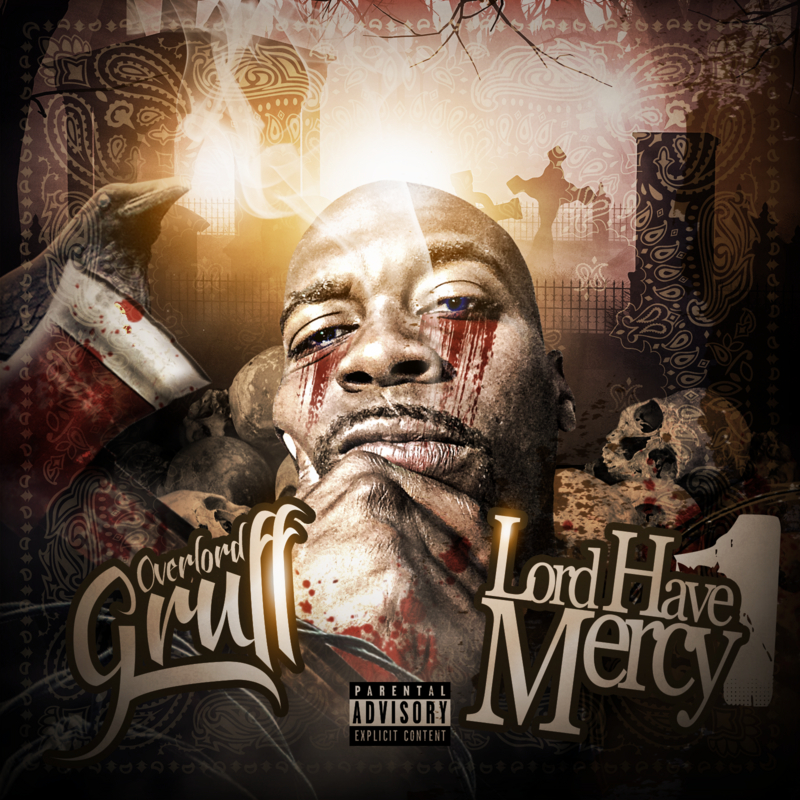 We’re sitting down with California’s Overlord Gruff. Let’s get right to it – What’s your story? How were you raised, what achievements have you had in your life? “Well, first off let me say thank you for giving me this opportunity. I was raised in a militaristic fashion. My parents always had me involved in some sort of combat training.  I didn’t allow myself to play team sports like football or basketball.  When you lose in a 1 on 1 match, you cant blame your team mates, only yourself.  I also had gone to church enough to know that this atlas had some intelligent grand design behind it.  I learned at an early age that knowledge of oneself is pinnacle to your success.  I joined the military at the age of 17.  I did 11 years total.  Since my parents were very “aware”, I didn’t get to have a lot of fun, so when I joined the service I was a loose cannon.  We would get drunk, fight and destroy shit everyday! That’s when my love for the art of Hip-hop began to manifest itself into my life.  Other service members and I would battle rap to past the time and BS of military politics.  I did this for years! So it was only a matter of time till I got good at it well enough to financially provide for myself. I also did the whole Afghanistan War (Operation Enduring Freedom) while I was in.  When I came home, I went right back to what I was doing before I left.  Hood-hangin’ on the south side of Pomona California! Since then, I graduated from Mediatech Institute in Oceanside California while receiving numerous AVID ProTools certifications, and even being awarded the coveted Salutatorian Award, while being indoctrinated into the Alpha Beta Kappa Honor Society for academic excellence amongst my peers. I am also the CEO and Founder of Guano Records, an Oceanside-based record label that caters to many different genres of music. My Vice President, Jorge Ibarra, along with myself also started our own Publishing Company by the name of Luxor Media Group.  I could go all day about our success, but we’ll let the fans decide.”

What artists and styles most influence your overall sound? “I would definitely have to say Tupac, Cassidy, Kurupt, Pastor Troy, Z-ro, and Pusha-T just to name a few.  It’s not just the lyrics of these guys that I would say, influenced my style. The way they lived their lives away from the microphone.  Each artist I named has surpassed the test of time.  They are a few who also chose to go at Hip-hop alone. I chose to practice the art of Hip hop without the restraints of mainstream trends.  I don’t incorporate much bling, strip clubs or Bentley Coupes in my lyrics.  If that’s what you’re going for – my music is not for you.” You have a new album – Lord Have Mercy – out now. What does it add to rap? What does it say about you as a performer?  “That’s an excellent question and I’m glad you asked.  Hip-hop is lacking that original grittiness. The craft of chasing those lyrical masterpieces has died down.  This will be a good thing, because the amount of artists in my lane is slim to none. Lord Have Mercy is pure, uncut and raw.  I follow neither trends nor behind other artists.  When you listen to my music, you’ll know every bar was perfectly placed strategically throughout each track. You will get pumped up!  I also want to create a lane for artists like myself that chose to break free from the trappings of what I call “Diet rap”.  I’ve got big plans for music, film and multimedia ventures as well.  It looks like I’m gonna be round’ here for a while! This gives you a preview of the inner-workings here at Guano Records, as well as my dedication as a master of ceremonies.”

What differences do you perceive that there are between the rap scenes in various cities through the United States?  “Every city has a ghetto, a place where the quality of life falls financially below the marginal occupancy.  These locations have been known to give birth to some of the best music there is to offer. It’s the struggle, the pain and hurt of living day to day not knowing where your next meal will come from.  I’ve been homeless, and the feeling of people overlooking you with the means to help you but wont, will make anyone express themselves through alternative means. Just imagine the melody of 4 homeless men singing around a burning barrel, under a bridge at eleven o’clock at night. It’s a beautiful sound if you ever get to hear it. Hip-hop is international, and wherever you can find corruption or injustice by a tyrannical government or organization; you will find hip-hop.” You have a very distinctive vocal style/wordplay; how do you think you have evolved since your earliest tracks?  “When I started to record back in 2007, I used to scream and yell a lot on my songs. My vocals would peak all over the place.  I didn’t have a pop filter, so I used a Crown Royal Bag.  I never compressed or equalized anything.  I even had most of my earlier music only coming out of one side of the speakers.  After years of practicing, I began to find my voice.  I learned that I didn’t have to yell to get my point across.  I focused more on my wordplay and what my fans would want from a guy named Overlord Gruff.  At the same time, my audio engineering began to progress.  I evened out lyrically with my production.”

You have a pretty massive catalog waiting to be recorded (600 tracks?); what do you see the rest of 2016 holding for you? “I’ve already started thinking about 2017.  I’ve been blessed with an opportunity to work with some of the best Audio Engineers in California.  Jorge Ibarra has been an Audio Engineer for a long time and has a vast array of knowledge over at Luxor Media Group.  I have Tyler Jefferson who I can go to at any time to record, so I’ll never have to worry about getting the job done.  We also have Zach Pellegrini and Michael Smith out of Oceanside California.  So yeah, we’re ready for war!

What has provided more of your fans – Facebook / Instagram / ReverbNation / Twitter or traditional word of mouth? “I would have to say they each provide their own specific tools for marketing and getting your word out.  These platforms provide us artists with a place to engage our fans, but sometimes we tend to forget their purposes and go a little overboard.  I don’t post pictures of food or my political views.  I know for a fact, beyond a reasonable doubt that politics, race and religion keeps man divided.  Knowing this, I choose not to conversationally engage in either of the three.”

Thank you so much for your time. Do you have any final thoughts for us at NeuFutur?  “For my fans, continue to strive for excellence in all that you do.  Never quit or give up when children are watching. And always follow your heart, even when you have to go at it alone. This train only comes around once, so make sure you do everything in your power to be on it before it leaves, because we wont get this again.