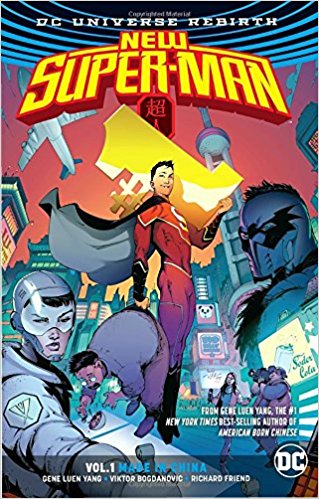 I have been out of the DC Comics loop for a bit, only keeping up to date with the cartoons and feature films. As such, we missed the initial run of New Super-man, a fascinating story that showcases new locales and a Superman-like character in Kenan Kong. Kenan starts the story as an American-styled bully in China, beating up and stealing from a fellow school mate. After the falls into a lucky situation regarding Blue Condor, government officials take notice.

Conscripted into the service of Chinese Ministry of Self-reliance (under Doctor Omen), Kenan is given a set of powers similar to that of the American Superman. After a few experience in which Kenan loses his powers, he gradually comes to realize that his qi ultimately determines the sort of abilities that he possesses. By the end of Volume 1, the story is set out – he is part of the Justice League of China alongside Bat-Man and Wonder-Woman. Readers will be similarly unsure of the motivation of Doctor Omen, the future for the Justice League of China, and whether Kenan will reach his ultimate potential.

The comic is a fun read due to the gorgeous art design; we spent quite a few moments looking at the costumes of each character. The usage of iconic designs including the stars of the Chinese flag and the 8 trigrams pull double duty here in that they showcase the foundation of the Chinese populace while mooring new superheroes to ancient traditions. As someone that’s missed the Great Ten storyline, their presence in this volume makes me want to pick up their previous stories.

New Super-Man: Volume 1: Made in China is available from your favorite local comic book store or online retailer. Cover price is $16.99 and the volume contains the first six issues; the New Super-Man comic is up to #12 (August, 2017).