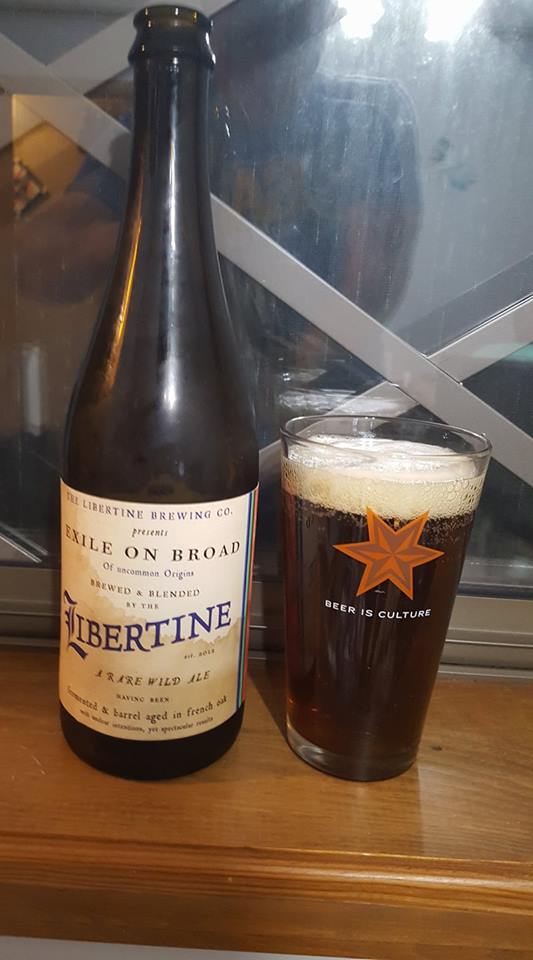 Libertine has given their Biere de Garde a bit of time in brandy barrels, which gives the brew a bit of a bite that has a tendency to take one’s breath away. The beer pours with a light brown to dark tan coloration ad a fair amount of off-white head that is fairly slow to dissipate. The beer’s nose has hints of a farmhouse and hay funk, while the initial sip of Exile on Broad Street has an immediate sweetness from the peaches. The tart twang comes forth pretty immediately after that, which is a bit reminiscent of sweet tarts. There are enough twists and turns to Exile on Broad Street that become more and less prevalent as the beer continues to reach room temperature.

Despite the fact that this beer is pegged at 9-plus percent ABV, I feel that it is tremendously easy to drink. Sure, there may be moments where the acidic bite dominates but the overall effect that the brew has on one’s palette has disappears a second or two after. Where many breweries are simply happy going to extremes with the sour side of their efforts, Libertine is able to balance the sour and sweet, the tart and alcohol burn to create a sublime balance to Exile on Broad Street that is transformative rather than merely intoxicating.

For additional information about the full range of beers (year-round and seasonal) that Libertine releases, visit their main domain. Further events and news can be sourced from the brewery’s social media profiles.