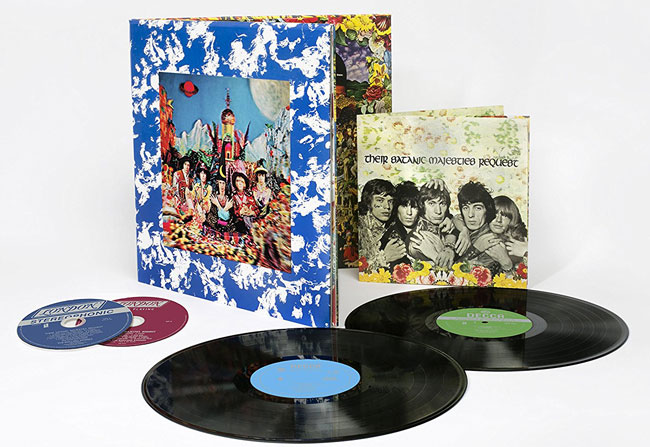 Fifty years after its release, the polarizing Rolling Stones classic (yes, classic) Their Satanic Majesties Request is finally getting a much-deserved re-release in the form of a double vinyl set (including mono and stereo versions). The package also includes a double hybrid Super Audio CD as well.

Released at the tail end of 1967, it was compared, rightfully so, to The Beatles’ Sgt. Pepper’s Lonely Heart Clubs Band, that had come out seven months earlier. Both records marked highly experimental (musical and substance, alike) times for the British bands, a departure from their earlier at this point well-established sounds. While Sgt. Pepper was embraced fairly early on, The Stones were hardly praised by the masses for their experimentation. Aside from the fantastic “She’s A Rainbow,” which charted briefly in the U.S., not many of the 10 psychedelic-soaked tracks here have become staples of the band’s live shows in decades since.

But over time, however, critics and fans alike have started to warm up to the record. In part, thanks to covers of these songs by bands as varied and Kiss, The Damned and Arcade Fire. Yes, it’s a big departure from The Stones’ established American R&B sound (one they would revisit again and again shortly after this release), but the set also houses some truly great material here. The group dabbles in vocal effects (“In Another Land”) and they relied on ambient sounds and a theremin as well as string instruments throughout to great results (hardly what you think of when you picture the world’s preeminent rock and roll band).

It was also The Stones’ first time self-producing and was the first step to opening the group to innovative ideas that led to a phenomenal five year-run of arguably their best work (Beggar’s Banquet, Let It Bleed, Sticky Fingers and Exile On Main St.).

This re-release will hopefully allow the public and critics alike to revisit one of the band’s most underrated albums. The set also includes the restored original 3-D Cover Art (in all it’s trippy, late ‘60s majesty)