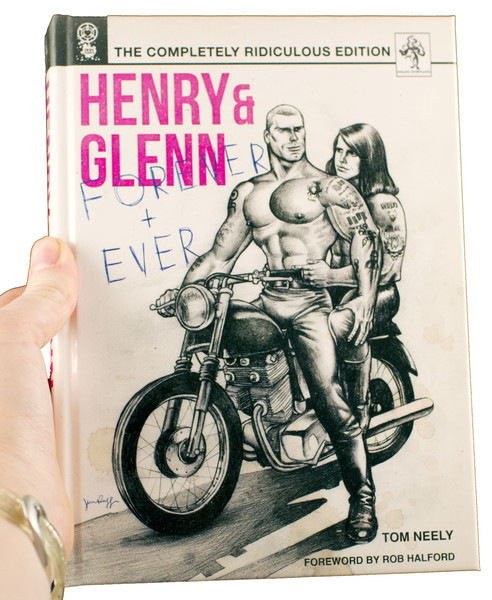 One of the greatest aspects of this long-running, hilariously creative cartoon series that posits a word where Henry Rollins and Glenn Danzig are life partners is summed up on the back of the book with a blurb from Rollins.

“Has Glenn seen this? Trust me, he would not be amused,” Rollins is alleged to have said years ago after seeing the comic.

And that quote is part of the genius behind Henry & Glenn. The two live in the suburbs, with a basement satanic altar, their neighbors are the affable Hall & Oates, who also happen to be devil worshipers, but the brilliance is in having the curmudgeonly Glenn Danzing, a man who has spent decades humorlessly defining himself as ultimate alpha male, portrayed as the jealous, insecure partner to Rollins. He’s needy, emotional and quite possibly exactly the way many of us hope he’s like in real life.

This collection is the first time all 20 stories are being released in one big graphic novel.

It’s clear though that Tom Neely, as well as the fellow cartoonists who contribute to this book, are coming at this from a place of appreciation of both musicians. Neely just happened to find the most brilliant way to satirize the metal and punk rock legends.

Here’s hoping this isn’t the last we’ve seen of the comic and that Danzig eventually gets the joke. If I can only have one, I’ll take the former.