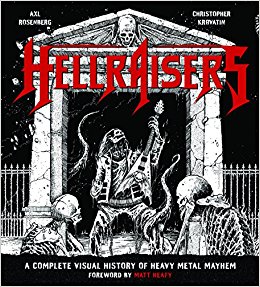 From the tight jeans and mullets uniform of the New Wave of British Heavy Metal, the cringe-worthy hairspray and glitter era, to the burning churches and scary-as-fuck Norwegian Black Metal sect, Axl Rosenberg and Chris Krovatin have managed to break down just about every imaginable subgenre of Heavy Metal in their satisfyingly thorough Hellraisers. This massively heavy hardcover is crammed with hundreds of color photos, playlists and essays throughout.

While the duo isn’t the first to try and tackle this ever-expanding genre in an authoritative tome (also check out Louder Than Hell by John Wiederhorn and Katherine Turman), they have managed to turn in one of the most enjoyable by combining deep knowledge and snarky writing that manages to come off as witty rather than dickish.

The pair dig into 18 different subgenres of Metal and still find room to add in small write ups and sidebars on topics as diverse as “Sexuality in Metal,” “Metal Mascots” and the controversial use of Drum Triggers (who knew?).

Although it’s clear both Rosenberg and Krovatin have a deep love of the music they’re writing about, they are still objective enough to slag off some of the subsets and attitudes of heavy metal that haven’t aged well (Hair Metal, Nu Metal, and again that whole burning down churches thing don’t get much love from the duo) and fess up to a lot of the stereotypes of the music, the bands and their fans.

Although it would be a shame if the two didn’t get put out another book, it’s hard to image an aspect of Metal they two haven’t dissected with this one.